Rosie and Alex have been best friends since they were 5, so they couldn’t possibly be right for one another…or could they? When it comes to love, life and making the right choices, these two are their own worst enemies. One awkward turn at 18, one missed opportunity…and life sends them hurling in different directions. 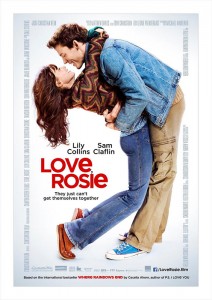 To prepare for the shoot, costume designer Leonie Prendergast (What Richard Did) started working with director Christian Ditter more than five months before production began to best determine the overall flavor of the outfits and to find specific looks for Rosie herself.

In director Christian Ditter’s new film Love, Rosie, Lily Collins and Sam Claflin star as Rosie and Alex, childhood friends seemingly destined to be together, yet a couple which fate itself seems determined to keep apart. “The story is about two people who really have a deep love for each other, but are constantly being pulled apart,” explains acclaimed Irish author, Cecelia Ahern, whose novel, “Where Rainbows End”, was the source material for the film. “I was introduced to Cecelia in 2007,” says producer Simon Brooks of Canyon Creek Films of his initial meeting with Ahern. Though familiar with her work and her considerable fan base, Brooks also knew that adapting her second novel, ‘Where Rainbows End,’ to the screen would be far from simple. “How do you adapt a book that’s all texts and emails,” says Brooks of one of the project’s biggest challenges – the novel’s epistolary structure, composed around the emails, letters and text messages which Alex and Rosie exchange.

Around the same time, Hollywood producer Robert Kulzer of Constantin Film, found himself in a bookstore back in his native Germany – a country, notably, where the Irish author has one of her most loyal followings. To adapt Ahern’s novel to the screen, Kulzer and Brooks turned to the British screenwriter Juliette Towhidi, whose credits include the 2003 award-winning hit comedy, Calendar Girls, with Helen Mirren and Julie Walters. To direct Love, Rosie, producers Simon Brooks and Robert Kulzer turned to the young German filmmaker Christian Ditter, here making his English-language debut.

When Robert Kulzer set about looking for the perfect actress to play the eponymous Rosie, he didn’t have to look far. As a producer on Lily Collins’ 2013 summer release, The Mortal Instruments: City of Bones, he had watched the young actress on the set in Toronto each day as she charmed the camera, cast and crew alike. With Ditter’s approval, Kulzer played matchmaker and arranged a meeting between the rising star and the young director.

“Sam Claflin was really our first choice to play Alex,” says producer Robert Kulzer. “He was terrific in the last Pirates of the Caribbean movie and had just come out with Snow White and the Huntsman.”

Love, Rosie began principal photography on May 13, 2013 in Toronto (doubling for Boston), where filming took place for one week before moving on to locations in and around Dublin (doubling for various English settings in the adaptation of Cecilia Ahern’s novel), for the remainder of the shoot. Anticipating Ireland’s infamous wet weather the filmmakers, much to their chagrin, were welcomed instead with endless days of sunshine for most of the eight-week shoot.