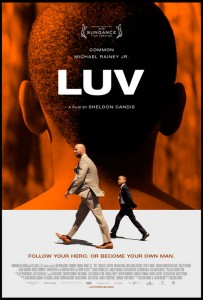 Director and writer Sheldon Candis says he has been working endlessly for years, trying to put the movie together, and more than anything, trying to keep it real in his mind and spirit. He always envisioned the great Charles S. Dutton to be in LUV.

Eleven-year-old WOODY WATSON is a timid Baltimore orphan who dreams of a better life — and his absent mother who may or may not be in North Carolina fighting drug addiction. Woody also reveres his uncle VINCENT as the father figure he never had. A street hustler and former drug dealer, Vincent’s fresh off an eight-year stint in prison and wants a new direction.

When Vincent bypasses his nephew’s school one day and offers to show Woody how a man handles his business, Woody jumps at the opportunity to join his uncle on a field trip of life lessons.

THE MAKING OF LUV

Durig my childhood in Baltimore, I spent late nights riding shotgun in my uncle’s car. I was a 9-year-old kid excited to be hanging out with my hero. Even at this young age I was well aware of the murmurs within my family that suggested he was a well-respected drug dealer and his reputation was infamous throughout the city streets. During many of these late night rides, he would explain to me what it takes to be a man. LUV is a fictional tale inspired by this relationship.

For me the filmmaker, my concern is foremost to tell a compelling fictional story that exploresr the human condition. In terms of storytelling it’s exploring my childhood existence. What if a trusted adult was engaged in illegal activity? What if I was with him when these things happened? How does a child handle violence for the first time? How does a boy react when he is exposed to murder at close range?