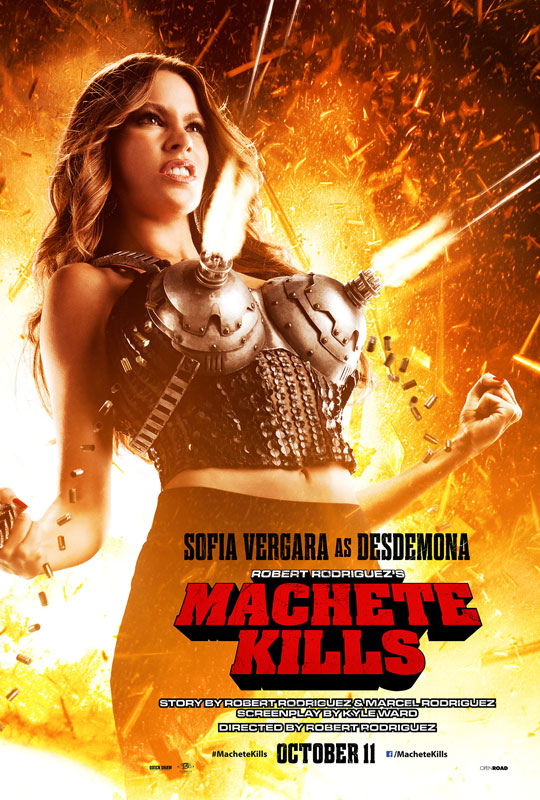 Machete costume designer Nina Procter returns for Machete Kills — and she brought a machine gun bra with her.

After much consideration, Rodriguez made the decision to direct Machete Kills. In fact, Machete Kills can be seen as two sequels wrapped together. Rodriguez explains: “We had no plans of making two more, but the first movie built up an audience, and built up anticipation for another movie. We decided to go ahead and make Machete Kills to give people the second and a taste of the third one all in one.”

After working up a 40 page scriptment with his brother and long time collaborator, Marcel, Rodriguez turned to writer Kyle Ward to flesh out a screenplay for Machete Kills.

Mel Gibson, who portrays Machete Kills’ ruthless bad guy, Voz, was a fan of the original Machete. “I was laughing because it was just so gratuitous in every aspect,” Gibson recalls. “At the same time you kind of got into it on another level.”

Oscar-nominee Demian Bichir plays Mendez, a ticking time-bomb with a split personality. “He’s an avenger, and he’s clever, and tough. Tragic things happen in his life that change everything and turn him into this crazy character with many different personalities,” Bichir says.

Perhaps the most unusual role in Machete Kills is El Camaleon, played by Antonio Banderas, Cuba Gooding Jr., Lady Gaga and Walt Goggins. Banderas was happy to travel to Austin to team up with Rodriguez again for the 6th time.

The structure of the screenplay, coupled with actor availability, often made each twelve-hour workday feel like its own complete film shoot. Rodriguez explains: “Lady Gaga showed up and we’re picking her costumes, and I’m giving her new lines. She comes in and she nails them, and goes from one part to the next, and I’m adding more stuff for her to do, and she leaves with a finished poster of her character at the end of that day. And it feels very surreal.”