From director George Miller, originator of the post-apocalyptic genre and mastermind behind the legendary “Mad Max” franchise, comes “Mad Max: Fury Road,” a return to the world of the Road Warrior, Max Rockatansky. 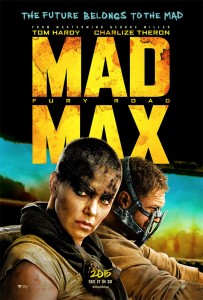 Long before production began, director George Miller set up a secure website loaded with videos of costume fittings, stunt tests, and reference materials for the actors to learn the backstories of the characters.

It’s 45 years after the fall of the world. There is no rule of law, no power grids, no water, and no mercy. In “Mad Max: Fury Road,” civilization is a memory, and only to a few. The world’s great economies have fallen into dust, the coastal cities have been erased, and in the wake of wars for water and oil, food is scarce and air is poison.

With “Mad Max: Fury Road,” director/writer/producer George Miller unleashes a world gone mad with the concussive force of a high octane Road War as only he can deliver it. The mastermind behind the seminal “Mad Max” trilogy has pushed the limits of contemporary cinema to re-imagine the beauty and chaos of the post-apocalyptic world he created and the mythic Road Warrior adrift within it.

Producer Doug Mitchell, Miller’s filmmaking partner for 35 years, says the decade-long effort to bring “Mad Max: Fury Road” to the screen has itself been an exhilarating ride.  Rather than write a traditional screenplay, the filmmaker contacted Brendan McCarthy, a comic book author, animator and artist who had been sending him his work for years. What began as a collaboration on conceptual art resulted in Miller asking the avowed Road Warrior fan to co-write the screenplay.

Casting Tom Hardy in the role, Miller knew he’d found an actor who could bring a palpable truth to the mythic figure, noting, “It’s easy to be cautious as an actor, but there are some who are emotional warriors, and that’s Tom. He’s fearless. I was waiting for someone like Tom to come along and knew he would find the soul of Max within himself.” Hardy and his stunt-double Jacob Tomuri were true partners throughout the film, working closely to divide up Max’s considerable stunt load.

Charlize Theron[3], who originates a new character in the canon—Imperator Furiosa—attests that, with this film, Miller has forged a totally new vision that stands alone, even in the wake of its rich legacy. Theron didn’t see Furiosa as someone with a lot of time for her appearance, and, after long discussions with Miller and hair and makeup designer Lesley Vanderwalt, she was struck by an idea. “I was a new mother; I was going to be in the desert; I thought, ‘We need to just shave my head,’” Theron remembers. “I was so excited that I called call George, and he took a breath. Then, he said, ‘Yes,’ and we did it the next morning. Looking back, I can’t imagine doing this film any other way.” Theron worked with Dayna Chiplin and principal fight choreographer and weapons advisor Greg Van Borssum to perform the fight herself.

The quest to immerse today’s audiences in Miller’s mad future with “Mad Max: Fury Road” would cross continents and span more than a decade. It would leverage the talents of hundreds of artists to design and fabricate an authentic post-apocalyptic universe, from the creation of 3,500 storyboards to thousands of props and costumes. In a logistical operation of unprecedented scale, the monumental production would hurl cast, crew and 150 hand-built drivable vehicles through the deserts of Namibia to stage a real-life Road War across multiple units for 120 days.

Deploying the production of “Mad Max: Fury Road” across the deserts of Namibia was staggering in volume alone. At the height of filming, the company topped 1,700 crew, with an average of 1,000 people on set at any given time. The whole operation required five 8 X 8 former German military transport trucks just to haul gear from location to location.