Based on Colin Harrison’s acclaimed novel Manhattan Nocturne (a New York Times Notable Book of the Year), Manhattan Night tells the story of Porter Wren (Adrien Brody), a New York City tabloid writer with an appetite for scandal. On the beat he sells murder, tragedy and anything that passes for the truth. At home he is a model family man, devoted to his loving wife (Jennifer Beals). But when a seductive stranger (Yvonne Strahovski) asks him to dig into the unsolved murder of her filmmaker husband Simon (Campbell Scott), he can’t resist. 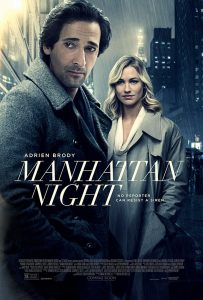 Production design was a big part of telling the story, as it was an ambitious goal to shoot all on location. Production Designer Lisa Myers and her team relied on a lot of creativity to achieve the look because very little was built on a stage.

“I finished reading the book Manhattan Nocturne, I knew I had to make it into a movie,” says director, screenwriter and producer Brian DeCubellis.  “On the back sleeve it said author Colin Harrison was the deputy editor of Harper’s Magazine, so I called up Harper’s and asked the receptionist for him. The next voice I heard was his voice. I said, ‘You don’t know me, but I’m a young filmmaker and I just finished reading Manhattan Nocturne and I want to make it into a movie.’ That was back in 1999.”

Four years later with the help of Tom Guida, DeCubellis secured the film rights of the book. DeCubellis had a vision for the movie from that initial reading.  “I had made an outline for the movie while reading the book four years earlier.  I just pulled that outline out and started writing it.  The first draft came very quickly and was to be the main structure which got updated many times over the years.”

Colin Harrison was very supportive of the screenplay and has commented publicly that it really captures the essence of his novel and in some ways improves upon it.“Brian made some insightful additions and tweaks that I wish that I had thought to put in the book,” Harrison happily admits.

With a script in hand, DeCubellis was ready to go out and find his cast and funding.  His close friend Dylan Kidd, who had been a film school classmate of Brian’s at NYU’s Tisch School of the Arts, had just finished his first feature film Roger Dodger with Campbell Scott. DeCubellis spent time on the set where he met Campbell and Jennifer Beals. Campbell took to the script and shared it with Jennifer and quickly the two were attached and onboard advocates.

Over the next 12 years, the film came close to being made with a range of various casts and scenarios. However, a critical piece or timing was always missing.  But the dream of making the movie never disappeared. Executive Producer Tom Guida chimes in “I would always say to Brian ‘We’re making this movie’ and he would always say it to me.”  Altogether, 16 years would pass from the time Brian first called Colin in 1999.

The first major turning point toward the film’s completion came when Campbell Scott gave the script to Adrien Brody, who read it and wanted to play Porter. Importantly, along with his role as an actor, Adrien Brody also agreed to become a producer; Manahattan Night became the first major project for Brody’s own film production company, Fable House.

The cast was drawn to the material and came on board with a passion to play their particular roles and tell this story. One of the key roles is the female lead of Caroline Crowley played by Yvonne Strahovski.  For Yvonne, the work was not for the faint of heart. “Manhatan Night is an adult themed movie, with its sensuality and sexuality.  I’ve often wondered what my Mom and Dad are going to think when they finally see it,” Strahovski laughs.

Campbell Scott, who plays Simon Crowley, remembers reading the script the very first time and how it stuck in his mind.  “There’s a scene in the middle of the movie that’s one of the best I’ve ever read.” He relished the opportunity to play a kind of role he is not usually considered for. Campbell had previously worked with director DeCubellis on a short film, The Worst Thing I’ve Ever Done, and was excited to team up again for Manhattan Night.

The final member of the quartet in the film is Jennifer Beals who plays Lisa Wren, the wife of Adrien Brody’s character.  “I think everyone can relate to the theme of temptation,” she says.

Manhattan Night also boasts some acting legends in supporting roles like Linda Lavin and Stephen Berkoff.  It was clear in working with Linda and Steven, that with all the experience that they each have, it really still comes down to the actor’s craft and their commitment.  What a treat to have a front row seat and see them work,” says DeCubellis.  “Speaking as both an actor and as a producer about my fellow cast” Adrien Brody adds, “we are very, very fortunate to have such gifted people so generously committed to this.”

As is often the case with independent films, actors are making room for it among their busy schedules shooting other projects.  Adrien Brody didn’t even have a day off in between films, flying straight from the Czech Republic to New York to begin shooting the next day as Porter Wren. DeCubellis explains, “We didn’t have a rehearsal period for this movie.  Instead I spent one day with each of the leads in the months or weeks before shooting to go line by line through the script and talk about all the ideas and ways it could be played.  We talked and talked until we had a solid game plan going into the shoot.  Some great ideas came out of those days, like Adrien coming up with the idea that Porter reads the Bazooka bubble gum comic and is inspired to have the confidence to call Caroline.  Then on the day it was just about blocking at the location.”

Though Manhattan Night is director Brian DeCubellis’ first feature, he has worked with Cinematographer David Tumblety since 1998 on a number of projects, from commercials and music videos to short films. The two began preparing for the shoot over six months in advance, looking at locations together, referencing movies, shot listing and talking about the look of the film.

One of the biggest contributors to the mood of the film is the score by Joel Douek, who has collaborated with Brian DeCubellis for over 15 years. “I wanted to convey the subtle complexities of the characters and to allow the music to speak between the lines of their emotions.  At the same time we feel the shifting layers of agendas and ambitions, brokenness and imperfections as the film progresses and so the music also needed to anchor each character thematically, and set them inside the iconic noir of New York City,” adds Douek.

The film was shot on location in Manhattan and other boroughs of New York City.  It was very important to the filmmaker to shoot the whole movie in the city of its title. Now it’s true that shooting on location in New York City brings with it a host of challenges, from very noisy streets to traffic and parking hurdles.  However the production found both the Mayor’s office and the people of New York to be as accommodating and hospitable as a producer could hope for.