Maps to the Stars connects the savage beauty of writer Bruce Wagner’s Los Angeles with the riveting filmmaking of director David Cronenberg and a stellar ensemble cast to take a tour into the darkly comic heart of a Hollywood family chasing celebrity, one another and the relentless ghosts of their pasts. The result is a modern Hollywood Gothic at once about the ravenous 21st Century need for fame and validation — and the yearning, loss and fragility that lurk in the shadows underneath. 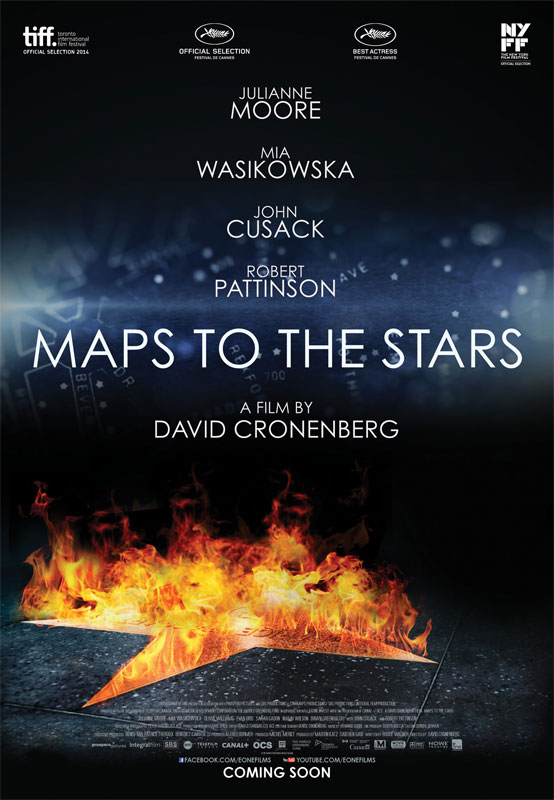 Robert Pattinson’s experience working on Cosmopolis with Cronenberg was so profound that he agreed to the role of Jerome before reading the script.

The origins of the story go back to the 1990s when Wagner – then a struggling actor/writer working as a limo driver, not unlike Robert Pattinson’s character in Maps to the Stars – began a screenplay encapsulating his experience of Hollywood. In what would become a major career theme, he dove headlong into all its roiling contradictions: the glory and the wickedness, the ambition and the delusions, the soaring excess and the spectacular falls. The story took many turns over the years, as Wagner developed into an acclaimed novelist and screenwriter, but after a decade, Wagner decided to show it to Cronenberg, since the two had long talked about working together. In 2011 Cronenberg introduced the script to producer Martin Katz, while they were making Cosmopolis, and soon after, the project began taking off in earnest.

At the heart of the story of the Weiss family is one of Stafford Weiss’s biggest celebrity clients: the famous but all-too-quickly fading Havana Segrand, who has long existed in the shadow of her even more legendary mother, classic Hollywood star Clarice Taggart, who perished in a mystifying fire. Taking the roles of Havana and her ghostly matriarch are 4-time Oscar® nominee Julianne Moore and award-winning Canadian actress Sarah Gadon. Moore was the first cast member to sign onto Maps to the Stars, several years before it was made, and she stayed committed to the role.

This film marks Mia Wasikowska’s first time working with Cronenberg. It was trial by fire on her opening day on the set as they shot the scene in which Agatha is beaten by her father, played by John Cusack, after trying to make amends with her mother.

Taking the role of Jerome is leading star Robert Pattinson, who wanted to work with Cronenberg again on the heels of taking the lead role in Cosmopolis (coincidentally, Pattinson played a billionaire who is a limo passenger throughout that film.)

Leaping with full intensity into the role of Stafford, a TV psychologistis is Golden Globe nominated John Cusack in an intriguing departure. Cusack himself grew from a child actor to a young heartthrob to an acclaimed actor on the public stage, so he has perhaps a unique insight into the dynamics of celebrity life that starts in childhood. Cusack had met Bruce Wagner decades before when they were both in the film One Crazy Summer, but his script for Maps to the Stars took Cusack by surprise. “It was the most savage deconstruction of Hollywood fame and secrets and that whole toxic brew that I’d ever seen,” he says.

While many interiors of Maps to the Stars were shot in Toronto, there was little doubt that the production would shoot in Los Angeles, to capture that very specific psychosphere – that strange brew of glamour and decay, creative highs and desperate lows — that cannot be imitated. Shooting for the first time in the city – indeed for the first time in the United States at all — was an inspiration for Cronenberg. “We only shot five days in LA, but we really made those days count. I mean, my mantra was, ‘I won’t do any shot without a palm tree in it,’ and I almost achieved that,” he remarks.