Arthur Bishop (Jason Statham) returns as the mechanic in the sequel to the 2011 action thriller. When the deceitful actions of a cunning but beautiful woman (Jessica Alba) force him to return to the life he left behind, Bishop’s life is once again in danger as he has to complete an impossible list of assassinations of the most dangerous men in the world. 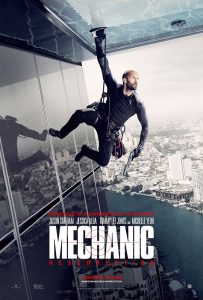 A spectacular luxury yacht, anchored in the Gulf of Thailand, just off the coast of Pattaya served as the setting for the film’s propulsive, heart-stopping finale. Shooting the sequence saw Jason Statham at his most active. On one end of the yacht, Statham would film his dramatic scenes with Alba and Hazeldine under the direction of Dennis Gansel.

In the 2011 remake of the ’70’s genre classic, The Mechanic, audiences were reintroduced to the consummate assassin, tasked with reluctantly training a hothead protégé while also trying to find the person responsible for killing his mentor.  While there was an ample amount of action throughout, the film was more intimate and character-driven, a showcase as much for the acting chops of Charles Bronson four decades earlier and later Jason Statham, who put his own personal imprint on hit man Arthur Bishop.

The result, in both cases, was an unqualified success. For Bishop’s follow-up adventure, Mechanic: Resurrection, the decision was made to broaden the scope of the series, taking its tough, ethical hit man “to the next level,” as screenwriter Phillip Shelby offers.

Also, adding international flavor to the production was selecting award-winning German filmmaker Dennis Gansel to make his American directorial debut with Mechanic: Resurrection. Gansel had been in development with another project at NuImage/Millennium when he was offered a copy of the script to read.  “Dennis is an up-and-coming European director,” says executive producer Frank DeMartini. A fan of the first film, the director was immediately taken with the possibilities the sequel presented: a stronger look into what makes its lead anti-hero tick and lots more inventive action.

In Mechanic: Resurrection, it’s the unique plight of a beautiful, imperiled woman that forces Bishop back into the fold. Key to casting the role of Gina was finding an actress who would bring her own strengths and magnetic presence to the part, a character who becomes a formidable ally to the mechanic.  They found that actress in Jessica Alba, who was eager to join the production.

Having cast their female lead, the filmmakers turned their attention to finding two actors who would be worthy antagonists for Bishop.  “We searched a very long time to find the perfect adversary who could inhabit the character of Crain, the man who forces Bishop to undertake his agenda,” says director Gansel.  “Sam Hazeldine proved to have all of the qualities we could have hoped for.”

One of the men that Bishop is tasked with eliminating is Crain’s biggest rival, the larger than life billionaire arms dealer, Max Adams.  The production was fortunate enough to attract a similarly larger than life acting legend to portray the magnate: Academy Award®winner Tommy Lee Jones.  “I was actually a little bit intimidated in the beginning,” admits Gansel, “because he’s…Tommy Lee Jones!  But he was such a humble guy to work with, open for any ideas, and bringing many of his own.  The part itself is not very large, but what he does with the character is amazing.”

The final piece of key casting would be for the role of Mei, a mysterious woman who gives Bishop both refuge and advice.  When executive producer Mark Gill sent internationally renowned action star Michelle Yeoh the script, she immediately signed on to be a part of the production.

Given a relatively short window of shooting, it was decided that an action unit would be established, working closely in conjunction with Gansel and his main unit.  With decades of experience in front of the camera as a stuntman, as well as behind the camera filming the action, Vic Armstrong was brought in to take charge of this high-octane squad.

DeMartini calls Armstrong “a legend. He’s doubled everyone from Harrison Ford in the Indiana Jones series to every James Bond except Daniel Craig. He’s known as one of the top second unit directors and he’s probably the world’s greatest living stuntman. This is the first time Jason and Vic got to work together, and they immediately had a rapport. Throughout the whole movie, Vic was creating action sequences that we didn’t even envision when the script was being written.”

In preparation for their action sequences, both Jessica Alba and Sam Hazeldine underwent extensive physical training.  “I did it simply for the fact that I didn’t want it to look ludicrous that I would be up against Jason in a fight,” laughs Hazeldine.

Alba continues, “I had taken training in many different martial arts over the years doing action for a TV show (“Dark Angel”), but for this film, I took kravmaga.  I felt it would be a lot more hand-to-hand, much more intuitive fighting.  In the moments that you see Gina defend herself and in action, I just wanted it to be brutal and real and intense and messy.  I think we’ve accomplished that, especially with Vic shooting the action.”

With a majority of the story taking place on the Asian continent, it was decided to film the movie in locations throughout the country of Thailand.  A movie studio in Bangkok was the site in which the opening scene of the film, a spectacular fight scene set in a cafe at the top of Sugar Loaf mountain in Rio De Janeiro. A meticulous recreation of the actual location was created on a soundstage with exteriors to be filmed at the actual location at a later date.  On yet another soundstage, an enormous underground submarine pen was constructed in which Bishop endures a blistering gunfight and attack in his attempts to reach billionaire Max Adams.Thailand got to play itself onscreen when filming moved to the resort island of Phuket, which served as Mei’s hideaway and refuge, and the setting of yet another dramatic fight scene.