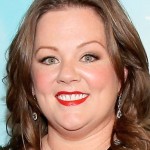 McCarthy married her longtime boyfriend, Ben Falcone, an actor and alumnus of The Groundlings, on October 8, 2005.

A native of Illinois, McCarthy first made her mark on the comedy stage performing stand-up in New York at The Duplex, The Improv and Stand-Up New York.  At the same time, she studied the Meisner technique under Michael Harney and then continued her dramatic training at The Actors Studio.  McCarthy starred in a variety of stage productions throughout the city.  In Los Angeles, she spent nine years as a main-stage member of the world-renowned improv and sketch comedy troupe The Groundlings.

Melissa McCarthy first gained recognition for her role as Sookie St. James on the television series Gilmore Girls, where she starred from 2000 to 2007. For her portrayal of Molly Flynn-Biggs, McCarthy earned an Emmy Award, and has been nominated again for the same role. Melissa McCarthy received an Academy Award® nomination for her role as Megan in the worldwide hit comedy Bridesmaids