Men in Black 3 (stylized MIB3) is an upcoming American 3D science fiction comedy film starring Will Smith and Tommy Lee Jones. It will be released as the sequel to Men in Black and Men in Black II on May 25, 2012, ten years after its predecessor, and fifteen years after the first film. It will also star Josh Brolin, Emma Thompson, Alice Eve and Jemaine Clement, with Barry Sonnenfeld returning as director, and Steven Spielberg returning as executive producer. 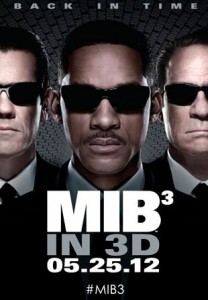 The first set photos for the film turned up online on November 17, 2010 showing Will Smith, Tommy Lee Jones, Emma Thompson, and Nicole Scherzinger on set.

The film is the third entry in the Men in Black film series which is based on the Malibu / Marvel comic book series The Men in Black by Lowell Cunningham. Principal photography began in New York City on November 16, 2010.

The film’s premise was first proposed to director Barry Sonnenfeld by Will Smith during the filming of Men in Black II in 2002, with Smith suggesting that his character, Agent J, travel back in time to save his partner, Agent K, and while at the same time exploring Agent K’s backstory. Sonnenfeld said the idea “turned out to be a very long process of development, mainly because of the knotting [sic] issues of time travel….”The film was first announced on April 1, 2009, by Sony Pictures Entertainment president Rory Bruer during a Sony ShoWest presentation.  By October 2009, Etan Cohen had been hired to write the screenplay. As of March 2010, Will Smith remained undecided whether to join this film or another, The City That Sailed.  Director Barry Sonnenfeld in May 2010 confirmed the return of the protagonists played by Tommy Lee Jones and Smith. Both had expressed interest in 2008 in reprising their roles. Other staff includes Walter F. Parkes and Laurie MacDonald as producers, with Steven Spielberg as executive producer; all were producers of the two previous films.

In June, writer David Koepp was hired to rewrite the Cohen script. On June 11, 2010, the fan site SonyInsider.com posted what it described as a “clip [that] debuted at an exclusive Sony 3D TV launch event at Sony Pictures Studios” showing Smith dressed as Agent J wearing 3-D glasses and stating, “I know what you’re thinking — ‘M.I.B.’, 3-D, we’re going to be blowing stuff up and all that. But that’s not really what we’re doing right now. We’re here for one purpose, and for one purpose only: Just to let you know that I’m about to make 3-D look good.” A teaser poster for the film was also released on September 21, 2010.A third writer, Jeff Nathanson, was hired in November 2010 to rewrite the time-travel segment of the script in which the story takes place in 1969.  Nathanson and Koepp, along with producer Spielberg, had previously worked together on the 2008 film Indiana Jones and the Kingdom of the Crystal Skull.

Principal photography began on November 16, 2010. even though, “We knew starting the movie that we didn’t have a finished second or third act,” director Sonnenfeld said in 2012. “Was it responsible? The answer is, if this movie does as well as I think it will, it was genius. If it’s a total failure, then it was a really stupid idea.”It was originally slated to commence on October 18, 2010, and continue until May 2011 in New York City, with shooting starting in 2010 partly in order to take advantage of a New York tax break in which the state rebates 30 percent of production costs incurred there. Filming was split into two parts, the first taking place from November until about Christmas 2010; the filmmakers announced shooting would begin again in mid-February, but it was delayed until April.