In the real-time, high stakes thriller Money Monster, George Clooney and Julia Roberts star as financial TV host Lee Gates and his producer Patty, who are put in an extreme situation when an irate investor who has lost everything (Jack O’Connell) forcefully takes over their studio. During a tense standoff broadcast to millions on live TV, Lee and Patty must work furiously against the clock to unravel the mystery behind a conspiracy at the heart of today’s fast-paced, high-tech global markets. 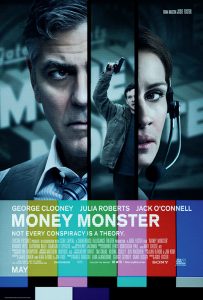 The entire stage of ‘Money Monster’ was shot completely in order, and that’s almost the full length of the movie – Director Jodie Foster

“I love this movie because it has two things that sometimes people think are opposites,” says Jodie Foster, who directs the thriller Money Monster.

“Jodie never lets up on the pressure cooker,” says producer Daniel Dubiecki, who produces the film with his partner, Lara Alameddine, and with Clooney and his partner, Grant Heslov.  “This whole film takes place in real time as this event is broadcast on live television – it’s very tense.”

Clooney stars as Lee Gates, a celebrated stock picker and famed host of the titular financial television show, who darts and dances around his set, shouting investment advice and punctuating market talk with silly props and sound effects.

Re-teaming with George Clooney is Julia Roberts, who plays Patty Fenn, the unflappable, steadfast and longtime producer of “Money Monster.”  “Patty Fenn is the uber-producer.  She can multi-task like nobody’s business – she is amazing,” says Foster.

Taking the role of Kyle Budwell, the ordinary man turned to desperate measures following a big-bank fiasco that costs him his entire life savings, is Jack O’Connell.  The breakout star of Unbroken, O’Connell portrays Kyle as a good, decent, hard-working young man who cracks under the pressure of financial ruin.

As Chief Communications Officer of Ibis Clear Capital, Diane Lester, played by “Outlander’s” Caitriona Balfe, is the spokesperson for the company embroiled in an unprecedented financial crisis.  The cast is rounded out by “Breaking Bad’s” Giancarlo Esposito, who takes the role of Marcus Powell, the police captain trying to defuse the situation, and “The Wire’s” Dominic West as Walt Camby, the CEO of Ibis Clear Capital, the company whose sudden stock plunge has incited Kyle to action.

In most major films, a director is shooting with one camera (or some other small number), all shooting in the same format.  In directing Money Monster, Foster faced a new challenge. “The ‘Money Monster’ show, itself, is shot by four different broadcast cameras, plus we, as filmmakers, had to film as well.” Simple enough – except that film cameras and broadcast cameras are incompatible.  While capturing the “broadcast,” the film cameras had to be out of the way.  The solution came with careful planning.

In using different cameras, Foster could create two distinctive emotional aesthetics.  “The film camera gives a dark, moody emotion that you can’t get any other way, and the broadcast camera gives you a bright, cheery perspective,” explains Foster.  “When we go back and forth between the two cameras, there’s a tension and energy that comes from the audience having to constantly shift between what’s real and what’s fake.”

But again, came the problem of being unable to shoot with both kinds of cameras simultaneously.  Clooney says that, in effect, the solution was that most of the film – the entire section that takes place on the TV show soundstage – was shot twice: once from the perspective of the broadcast cameras, and again with the film cameras.  “Nine full pages of monologues a day,” says Clooney.  “You do it all, and then you do it all again for the other camera.”

The film’s other central location for the bulk of the film is the “Money Monster” show’s control room, where Patty directs the show and tries to help keep Lee alive.  “We shot at CBS studios in the upper West Side of Manhattan,” says Foster, noting that it is a real-life control room that could handle a “Money Monster” type of broadcast.  “We wanted to keep the certain level of reality found in live television, and capture the intensity and obsession that happens in that moment.”

To create a distinction between Money Monster the film and “Money Monster” the television show, Kevin Thompson, the film’s production designer, created a set within a set.“It was always important for Jodie to see the set of the ‘Money Monster’ television program itself –the set of the show that viewers on TV – and also the backstage aspect of the set,with the broadcast cameras that would be shooting the show,” explains Thompson.  Naturally, the film cameras would be behind all of these, shooting the motion picture.   To make the set as realistic as possible, Thompson researched and incorporated various elements found in financial news programs.

Connecting all of the pieces of the Money Monster puzzle into a tight cohesive narrative is editor Matt Chessé.  “It’s a challenging story to put together,” says Chessé, who not only cut together the film, but the “Money Monster” show itself.  “There was so much footage to work with,” he says. “There were three cameras shooting the ‘Money Monster’ show that I then had to edit to be viewed in several different ways:  the public watching the hostage situation unfold;from Julia’s character’s point of view in the control room, receive it as a live moment; and,selecting the material to make the television show.”

“I also had to put the Money Monster movie together,” continues Chessé.  “I had so many options. It’s like a five pronged crown, and I have three prongs of the five that I can maneuver between at any given moment.  There are a lot of choices.”