My Big Fat Greek Wedding 2 is the highly anticipated follow-up to the highest-grossing romantic comedy of all time.  Audiences worldwide embraced the immensely relatable characters, seeing their own families reflected in the adorably brash and bold Portokalos clan members. 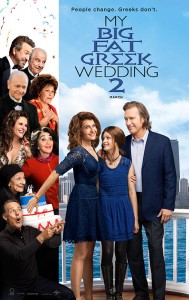 During the night filming at the Portokalos house—in what was known as the “warm-up house”—Nia Vardalos, John Corbett, Louis Mandylor and Elena Kampouris brought guitars and played songs between scenes.

While many iterations of the story have been reported over the years, the global blockbuster that would become My Big Fat Greek Wedding was not actually based on writer/performer Nia Vardalos’ solo show. In fact, the reverse order is true.  Vardalos wrote the screenplay first but didn’t have representation at the time and couldn’t get her script read.  In an effort to secure an agent, she mounted the screenplay material on stage as a solo show.  Actress Rita Wilson saw the play and liked it so much that she asked her husband, Tom Hanks, and his Playtone partner, Gary Goetzman, to see it.

The rest is Greek history.

Despite the success, a sequel wasn’t an immediate priority for Vardalos.  Over the course of the first film’s many successes, Vardalos was privately struggling to become a parent.  On the first day of her daughter’s kindergarten, Vardalos recalls, “I was crying so hard at the idea of my daughter starting school.  Another mom, I think in an effort to calm me, said: ‘In 13 years, they’ll go off to college and move away from home.’”

It was then and there the writer/performer got the idea for the sequel.  Vardalos laughs: “I was struck by such panic and fear at the thought of my daughter leaving me that I realized I had morphed into my own overbearing, bordering-on-suffocating, Greek parents.”

Vardalos immediately started writing, imagining what the Portokalos and Millers’ family life was like 10 years later.  Vardalos wrote the screenplay over a four year period. When news of the sequel broke, fans were ecstatic.  In her characteristically wry fashion, Vardalos wrote on Twitter: “Now that I’m experiencing motherhood I feel ready to write this next chapter.  A few folks will claim I ran out of money or wanted to kiss John Corbett again.  One of these things is true.”

Once Vardalos delivered the sequel’s screenplay, the team met with director Kirk Jones, who has made his career out of exploring familial relationships in such beloved films as Nanny McPhee and Waking Ned Devine. Vardalos enjoyed watching the reserved British director take on the boisterous, raucous cast.  She laughs: “Kirk had no idea what he was about to get into by walking into a gaggle of Greeks, Italian and Jewish people who never shut up.  No one heard him say anything because we all talk.  A lot.”

Vardalos never considered writing a sequel without the entire original cast on board. Joey Fatone, who plays Cousin Angelo, remarks: “Fifteen years have gone by, and we jumped right in as if no time had passed. It was amazing.”  John Corbett is the first to admit that he cajoled Vardalos into allowing him to come back as Ian.  He commends: “Nobody on this team was happier than me.  When I first read the script, I called Nia to say it was a masterpiece.” Vardalos praises her frequent co-star and good friend for his generosity: “John is one of my closest friends.  Anything that we feel in a scene, we will explore together.” One of the most candid members of the Portokalos family is Maria, played by star-of-stage-and-screen Lainie Kazan.

Upon learning the production would be returning to Toronto, Vardalos wrote in two roles for her two longtime girlfriends, professional actors based in the city.  Tannis Burnett and Kathryn Greenwood auditioned for the roles of Edie and Marge.

The table read on May 7, 2015, was an emotional day; the cast arrived, hugged and cried happy tears.  Constantine recalls: “It was wonderful being together again working on a film filled with love.  It was a big family reunion.”

After the read, lunch was served (of course!), then it was a long process to get everyone into vans for the first rehearsal.  The cast was surprised to see that they had arrived at the original Portokalos family home.

Additionally, Vardalos’ real-life family arrived on set for several days to be background actors again at the church wedding and at the backyard reception.  Her mother and sister, Doreen Vardalos and Marianne Vardalos, are the seasoned hands cooking the wedding-reception dinner in the kitchen at Dancing Zorba’s, while her father, Constantine Vardalos, is reprising his role as the church chanter.

One of the production crew’s favorite scenes was when they were able to lens in an actual church.  Notes Keen: “We brought in a series of painters from Greece to paint the interior, and it is mind-blowingly beautiful.”

The entire My Big Fat Greek Wedding 2 cast and crew always focused on one maxim that audiences have embraced and championed since the first film: At the end of the day, what matters most is family.  So much so that at the end of production, Corbett put his arm around Vardalos and said, “Let’s do it again, baby!”