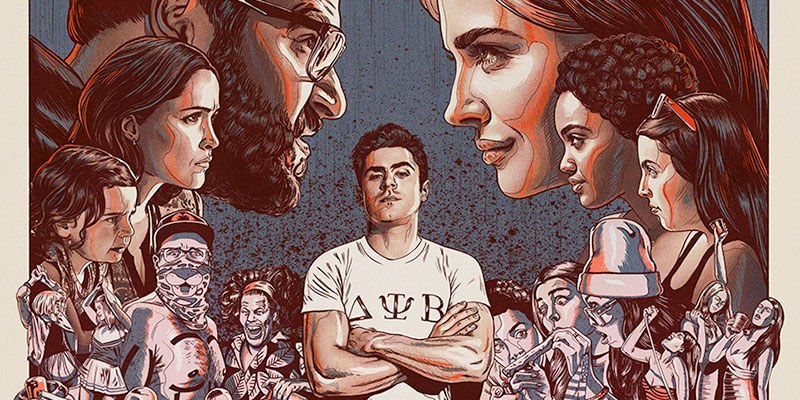 Now that Mac (Seth Rogen) and Kelly Radner (Rose Byrne) have a second baby on the way, they are ready to make the final move into adulthood: the suburbs. But just as they thought they’d reclaimed the neighborhood and were safe to sell, they learn that the new occupants next door are a sorority even more out of control than Teddy (Zach Efron) and his brothers ever dreamed of being.

Released in 2014, the original comedy Neighbors struck a chord with audiences who enjoyed the film’s tale of the uproarious battle between a young couple and the fraternity that moved in next door.  Naturally, the film’s hearty box-office and critical acclaim spawned discussions of a follow-up between its creators—director Nicholas Stoller and producers Seth Rogen, Evan Goldberg and James Weaver.

Determined not to suffer the same fate as the trite comedy sequels of the past—ones that ended up as overstuffed re-hashings of the originals—the team underscored that bigger doesn’t mean better.  Comments Rogen, who stars in and produces the film: “The conversation wasn’t how to escalate it; that’s where a lot of sequels go wrong.  It was how to evolve it.  We weren’t trying to add more and make a bigger version of the first; we wanted to explore what the next thing was that would happen in these people’s lives.”

It was this duality of purpose that appealed to the team.  Says Rogen: “The first film dealt with not wanting to accept the idea of growing up and still having the desire to party and act immature.  In this one they’ve accepted that they’ve grown up, but don’t want to accept that their kids are going to grow up and eventually dislike them.  While the first one was about Mac and Kelly wanting to still be kids, this one is about them trying to control a kid.”

While developing the project, numerous story ideas and scenarios were bandied about (Delta Psi returns years later!  There’s a mythological party dorm called Dormopolis!), the creative team ultimately landed on the idea of a hard-partying sorority moving into the vacant house next door.  It was then that they made a surprising discovery.  “Someone in our office was in a sorority and overheard us talking about the idea of a hard-partying sorority moving in next door,” recalls Rogen.  “She offhandedly mentioned that they actually aren’t allowed to throw parties.  Once we looked it up, we found that it was true it gave us the idea for the whole storyline.”

In fact, a little Googling dug up the fact that Greek letter sororities are barred from serving alcohol at their residences.  With the discovery of this glaring gender inequality, the filmmakers had stumbled on an interesting issue that broadened the scope of the Neighbors universe.  “When we started researching how sororities work, we were shocked at how sexist the system was,” says Evan Goldberg.  “Seth and I are from Canada and assumed that they threw parties just like the frats did.  We knew that having a feminist undertone and storyline would make the movie a lot more interesting.”

The creators of the first film’s characters, Andrew Jay Cohen & Brendan O’Brien, are joined by Rogen, Weaver and Stoller in screenplay duties on the second comedy.  Together, they imagined Mac and Kelly going head to head with a group of empowered young women attempting to challenge a sexist system.

With the trifecta of Rogen, Efron and Byrne set to return, the filmmaking team began the search for an actress to play the fearless, passionate and ruthless leader of Kappa Nu.  The role went to Chloë Grace Moretz, whose fierce intelligence and impressive work in film and television made her perfect for the role.  “Chloë is only 19 but is wise beyond her years,” lauds Stoller.

The role provided Moretz with the opportunity to test her skills in the world of improv-heavy comedy.  “It was different for me because most of the other movies I’ve done have been dramatic pieces and took a much different approach,” states Moretz.  “On this set, we were encouraged to mess around with the lines and to go off book.  I was able to be a total ham and get away with it…instead of having to hide my ‘hammy’-ness.”

While rushing Phi Lambda, Shelby meets Beth and Nora. For Beth, who just got out of a long-term relationship, going to college provided the opportunity for her to explore her burgeoning sexuality. Introduced to audiences in the breakout film Dope, actress Kiersey Clemons takes the role.

Actress Beanie Feldstein who playd Nora didn’t have a lot of experience to draw from for the character’s deep exploration into recreational drug use.  “I’ve been given the craziest stuff to do in this film and knew nothing about drugs, so much so that they had to teach me how to use a lighter,” laughs the actress.

Returning as Teddy’s Delta Psi brothers, actors Dave Franco, Jerrod Carmichael and Christopher Mintz-Plasse reprise their roles as Pete, Garf and Scoonie, respectively.  While they remain close, the frat brothers have all begun making their mark in the world—well, with the exception of Teddy.  “You grow up, but you don’t necessarily grow apart,” offers Carmichael.  “They are still hanging out and still like each other, but you become an adult.  Unfortunately, Teddy is still trying to figure it out.”

To fill out the cast of both new supporting characters and cameos, the filmmakers assembled a cast of some of the funniest actors working in comedy today. “One of the things we learned from the first one was that it was valuable to cast every small role with the funniest person willing to do it,” explains Rogen.   New to the world of R-rated comedies, actress and singer Selena Gomez was brought on for the role of the Phi Lambda president.

With much of Neighbors 2: Sorority Rising again taking place between Mac and Kelly’s home and the Kappa Nu house, the production team geared up returning to the scene of the crime…sort of.   While the first film was lensed entirely in L.A. with two existing neighboring houses, the majority of filming this go-around took place between the same two neighboring houses in Atlanta, Georgia.  “It was interesting to produce a movie that is set in the same place, without filming it in the same place,” notes Weaver.  “So we’ve had to be creative with our choices.”

Production began in August 2015 and took place over a nine-week period with Atlanta filling in for Los Angeles filling in for the fictitious Ardendale.  Production designer Theresa Guleserian and her team were put to the task of re-creating both houses entirely on stage.

The largest sequence orchestrated in the Neighbors universe thus far takes place at one of Ardendale’s Braxton University’s tailgate events.  To raise the rent required to keep their sorority house, the Kappa Nu girls cleverly ratted out all the local weed dealers and are selling the only weed available in the area at the school’s tailgate—naturally, at inflated prices.  Mac, Kelly, Teddy, Jimmy and Paula set out to steal the weed and shut them down, resulting in an extensive foot chase sequence through the raucous crowds of inebriated college revelers.