Seth Rogen, Zac Efron and Rose Byrne join forces with director Nicholas Stoller for Neighbors, a comedy about a young couple suffering from arrested development who are forced to live next to a fraternity house after the birth of their newborn baby. 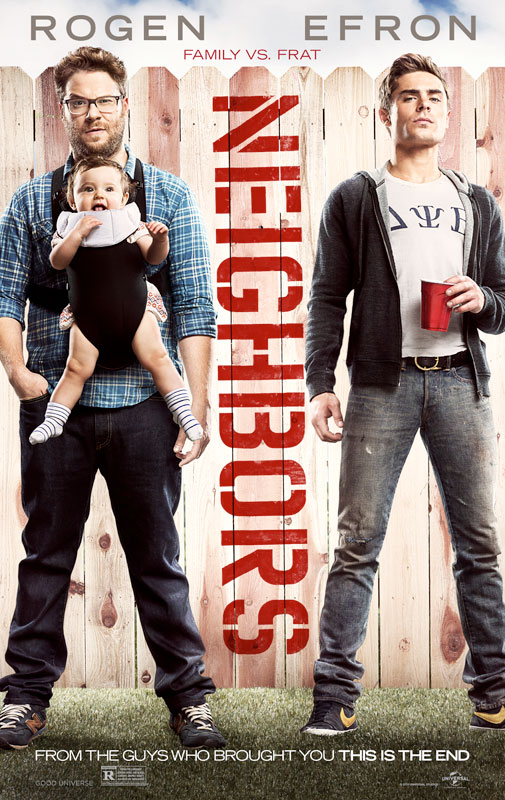 To bring authenticity to the party scenes, cameras and iPhones were distributed to extras, partygoers and cast members for additional first-person perspective. Cohen, who also served as second unit director on the film—was instrumental in capturing a number of the insane party moments.

Neighbors was inspired by writers Brendan O’Brien and Andrew Jay Cohen’s admitted fear of adulthood as they transitioned from their twenties into their thirties.  While they knew that this was the time in their lives when the urge to settle down should take root, the pair was reluctant to embrace adulthood and all its concomitant responsibilities.  Recalls O’Brien: “Andrew and I were in our thirties and had both gotten married.  I had my first child, and we both found ourselves struggling with the fact that we didn’t feel like kids anymore but certainly didn’t feel like responsible adults either.”

The duo wrote the part of harried father Mac Radner with actor and comedian Seth Rogen in mind—a role that they knew would play against audiences’ experience of Rogen as a hard partyer in films. O’Brien and Cohen, longtime friends and collaborators of Rogen, pitched the idea to Rogen and his producing partner, Evan Goldberg, to make under their banner Point Grey Pictures, a company led by Neighbors’ other producer, James Weaver.

With the director in place, the team began fine-tuning the script and researching the colorful fraternity culture, one that they didn’t aim to mock, but rather explore.  As self-proclaimed comedy nerds, many of the filmmakers had no personal experience with Greek life outside of classic movies.  “My knowledge was mostly through movies like Animal House, Revenge of the Nerds and Old School,” explains Rogen.  “I did co-write a few episodes of Undeclared about fraternities, but my exposure was pretty limited.”

As the role of Kelly became more prominent, the filmmakers knew they’d need an actress with comedic prowess who was willing to go the distance.  After working with Australian actress Rose Byrne and being blown away by her scene-stealing performance in Bridesmaids, Stoller knew she could carry off the insanity in and around the Radner home.  “We all thought about Rose for this role.  She is a comedic genius,” he commends.

For the role of Pete, Delta Psi’s vice president and second-in-command to Teddy, Stoller and the producers sought out Dave Franco.  Franco appreciated that Pete wasn’t just a one-dimensional, directionless party animal.

As much of Neighbors takes place between Mac & Kelly’s house and the Delta Psi fraternity, the production team was put to the task of finding two homes side by side that could accommodate the production. The perfect pair of houses was found in the historic West Adams District of Los Angeles, which became the production’s home base for the majority of the shoot.  While Mac and Kelly’s house was able to serve as both the exterior and interior sets, the frat house was another matter.