Noma: My Perfect Storm is a feature-length documentary film about the celebrated chef René Redzepi set against the backdrop of the Copenhagen-based restaurant, NOMA, The Best Restaurant In The World 2010, 2011, 2012 and 2014. 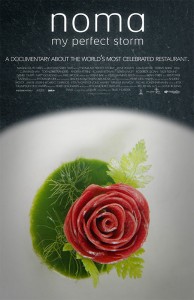 When chef René Redzepi and co-owner of the two-Michelin star restaurant Noma was frustrated by the institutional dictates requiring that servers wear suits and ties, he sent out his tattooed cooks to greet the restaurant’s customers. Where most elite Michelin restaurants offers and requires the use of silverware, he pushes his customers to eat with their hands. Foie gras is not on Noma’s menu; instead, there are ants and live shrimp.

One day, in 2007 while I was still living in Copenhagen, a friend of mine told me he had heard that a lot of internationally acclaimed chefs had been invited by René Redzepi to attend some kind of a special event taking place at Noma.

Since I knew of most of these 15 great chefs from France, Spain, Italy, Sweden, Holland, USA, UK, Finland, and Denmark, I got curious and went to Noma looking to get some more information from Redzepi himself. I knew very little about Redzepi, only the fact that he was the two Michelin star chef of Noma. We clicked immediately, and one week later, I returned to shoot the event, taking place at Noma over two consecutive days.

Observing Redzepi during this event, I got the feeling that he was on to something BIG, something   so different and so far away from the old fashioned ways of the culinary world I myself had struggled in as a young chef. My feeling was, that this young chef, with his very own way of seeing and dong things, was challenging the whole world of gastronomy, as we all knew it.

And I liked that!

I felt that what he was trying to do was going to change the international world of gastronomy forever. It intrigued me and I became passionate about finding out why Redzepi was doing what he was doing, and what made him so damn good at it!

This was the embryo of the idea of which NOMA: MY PERFECT STORM is the fruition.

The film is inspired by two books written by Redzepi. In the first, Time and Place, he discusses his preliminary adventures in the restaurant business and the establishment’s relationship with its suppliers. In A Work in Progress, he recounts a single year of his life at Noma.

Another dimension of the film relates to the research I conducted across more than two years at Noma and my various conversations with René and several members of his entourage, stationed in Denmark and abroad. I had the opportunity to share in the daily life of René Redzepi and his team, and to discover over many weeks the constant efforts necessary to ensure the smooth functioning of Noma, by way of a machine-like system of operation comparable to that of a Formula 1 team.

The apex of highbrow culinary technology: 45 place settings that must be served to perfection for four hours, twice a day. There is no room for error. René Redzepi is the engine fuelling Formula 1, Noma, and without that engine, Noma would not be able to continue existing.

I wanted to make a film that is not simply a film about a chef at the stove, but the story of a man in tune with the times, able to pick up on and respond to the prevailing feelings, sentiments, and desires. A tale based on the cultural duality of a character; a story of human relationships, in which joy and sorrow blend to give birth to complex and vibrant meals; a story in which differences between people become an asset; a story in which old wounds resurface. It is also the story of a revelation.

What interests me is the impressive franchise built by this young man who still does not seem to understand why we wish to make a film about him, who ignores or toys with celebrity, and who neither considers cooking an art, nor chefs artists.

I like the idea that René Redzepi represents the antithesis of a feudal culinary system, in his embodiment of the possibility that a young man who comes from nothing can break with tradition and the age-old stereotypes passed down through the generations by such old gastronomic titans as France and Italy.

The aim of Noma, which signifies Nordic cuisine in Danish, is to promote the culture, nature, history, and environment of a region by way of a dish. The genius of René Redzepi is that he is constantly reinventing himself as a chef through the discovery of innovative techniques that permit him to introduce people to a new world of culinary delights.

But he is also certain to remain the little boy from Macedonia who ran through the fields and woods picking berries and hazelnuts, someone who does not always take himself too seriously.