NORM the polar bear (voiced by Rob Schneider) doesn’t know how to hunt, but he does possess a rare gift: like his grandfather, who once ruled the Artic, Norm can speak to humans. When plucky real-estate marketing director VERA (Heather Graham) shows up at the Artic to shoot a TV commercial promoting luxury houses for her unscrupulous billionaire developer boss MR. GREENE (Ken Jeong), Norm knows he needs to do something to save his Arctic home. 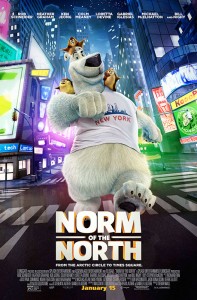 Inspired in part by one of the Arctic’s most iconic animals, Lionsgate Executive Vice President of Family Entertainment Ken Katsumoto reached out to Los Angeles-based Splash Entertainment to develop a story that had heart, humor and most importantly, a misfit hero. “It was important that our protagonist have a unique attribute that he perceives as a weakness but ends up proving to be a strength,” explains Katsumoto. “Similar to the way Rudolph the Red-Nosed Reindeer thought he was flawed by having a shiny nose, Norm’s perceived weakness — speaking human and his ability to feel — helps him accomplish the goal of saving his home from a crazed developer in New York City.”

To accompany the gentle giant of a bear on his journey, Norm of the North producers surrounded him with comic relief in the form of three mischief-making lemmings. “We thought it would be hysterical to combine Norm, the largest creature in the Arctic, with lemmings that are small and indestructible,” says Nicolas Atlan, one of the film’s producers and Co-CEO of animation company Splash Entertainment.

After reading the script for Norm of the North, three-time Emmy®-nominated Rob Schneider decided to make a foray into the realm of family-friendly entertainment. “I have a little girl right now and there’s a real magic to children watching animated movies,” Schneider says. “Being part of something fun that kids and their parents can enjoy together is a really nice thing.” The film’s producers say they chose Schneider for his vocal warmth and spot-on comedic instincts. “We immediately fell in love with Rob’s voice,” Katsumoto says.

Heather Graham anchors the human element of the story as Vera, a single mom working as a marketing director for Mr. Greene while struggling to support her brainy daughter. The filmmakers listened to a number of actresses before finding the right one to voice Vera. “We needed someone who could be fierce but sensitive at the same time.” says Katsumoto.

Every bit as formidable as Vera is her precocious daughter, Olympia, played by Maya Kay. One of the young talents who gave voice to Lionsgate’s animated hit Alpha and Omega[2], Kay had a blast portraying Vera’s high-IQ daughter and working with the talented Heather Graham.

Ken Jeong, star of his own hit ABC TV series “Dr. Ken,” jumped at the chance to voice an animated movie villain in a film his own children could actually see. “I have twin daughters and most of the movies I do I can’t show my kids yet,” he explains. “With Norm of the North, they’ll finally be able to watch one of Daddy’s movies. That was kind of a big incentive for me to be part of this project.” The filmmakers picked Jeong to play the hilariously avaricious Mr. Greene based on his proven ability to get laughs even in a bad-guy role. “We fell in love with the fact that Ken can be villainous and likable at the same time,” Katsumoto says.

The Norm of the North producers also cast overseas talent for Norm’s grandfather, the former king of the Arctic. The character needed to sound both kindly and authoritative, which made Irish acting icon Colm Meaney — best known to millions as Chief O’Brien in Star Trek: Deep Space Nine — the perfect man for the job. “Colm got the character very quickly and really brought him to life with this funny, very warm voice,” Atlan recalls.

For what would be its first feature film project, Splash Entertainment used the same animation techniques the company perfected over the course of producing hundreds of TV shows, by pre-visualizing the storyboard with live-action reference sequences. “It was an exciting step forward to produce a theatrical movie, but much of the process is the same as what we do for TV shows and our DVDs,” explains Splash Entertainment President Liz Young. “An essential part of the pre-production process for Norm of the North was filming the storyboard with live performers.” After creating the storyboard for a given scene, the company produced a pre-visualization “animatic” to roughly choreograph the characters’ movements. “A group of actors then watched the scene and performed it as if they were the characters,” Young says.

For the Manhattan sequences, animators steered clear of physical 2-D matte backgrounds. Instead, they used CGI to build a stylized urban space modeled directly on the real-life metropolis. “We wanted it to really feel like Norm is in New York and that the city itself is a very important element in the story. We’re especially proud of the dancing scenes in Times Square and the chase across the Brooklyn Bridge.”