Spike Lee’s Oldboy kicks off with the unfathomable experience of Joe Doucett (Josh Brolin) a downward-spiraling advertising executive and absent father who, one drunken night, is kidnapped out of the blue and placed into a mind-numbing solitary confinement within a bizarre, hotel-like prison for the next 20 years – 20 years full of torment that pass without any indication of his captor’s identity or motive. 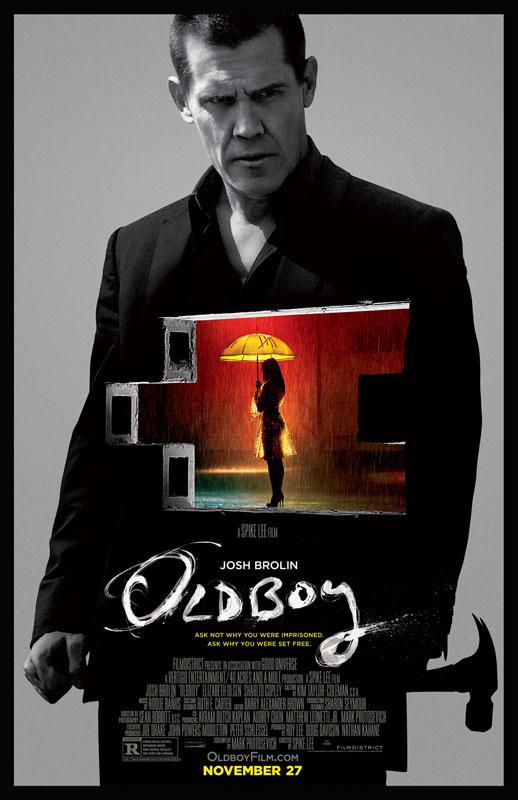 To create that form, Lee says he was commited to respecting the Korean film, but not to copying it. “When we first started talking about Oldboy, Josh Brolin sought the blessing of Park Chan Wook and his words to us were ‘Whatever you do, make your own film,’” he recalls.

The story of Oldboy is already a lurid legend among comic book lovers and cult film followers for its epic, mystery-filled vendetta.  The fascination with it began in the late 90s, when Garon Tsuchiya and Nobuaki Minegishi created an eight-volume manga about a man who was mysteriously locked away in a private prison with only a television set as a companion for years on end.

That unsettling premise then inspired master director Park Chan Wook’s 2003 film starring Choi Min-Sok in an experience that shocked, unnerved and moved audiences around the world. that Park was dubbed “the Quentin Tarantino of the East.”

Among the many fans of the film was Spike Lee.  As it did for so many others, Oldboy consumed Lee the first time he saw it, years ago.  “I was just blown away by it,” he recalls.  “It was a completely unique story with all the best elements of mystery and revenge, portrayed in the grittiest possible of ways.  People had never seen anything like it — I hadn’t either.” It was only later, however, when Lee read Mark Protosevich’s screenplay for an American revision of Oldboy that he began daring to imagine how he might approach the story in his own way. While he kept to the basic themes of both the manga and the Korean film, Protosevich added new characters and revised others to entwine them into the fabric of 21st Century American culture.

One thing was always clear about this new production of Oldboy:  it would take its lead actor to the very brink, requiring someone capable of maneuvering at the steepest edges of the human psyche.  One person capable of that, the filmmakers all agreed, would be Josh Brolin. “Josh is not one of those actors who only does one thing – he’s very flexible,” says Spike Lee.

Taking the role of Marie Sebastian — which takes off in a different direction from the leading female role of the Park Chan Wook film, yet still with a gut-wrenching twist — is Elizabeth Olsen. Despite the risks of the role, Olsen was swept up by the screenplay.  “I had never seen a script that played so much with a heightened reality,” she comments.

For this new version of Oldboy, Spike Lee set out to create a fresh new world for the story to unfold in – a nameless American city from which Joe Doucett is snatched into a surreal captivity and then returned 20 years later.  He was supported by an unrivaled creative team including: director of photography Sean Bobbitt, editor Barry Alexander Brown, production designer Sharon Seymour and costume designer Ruth Carter.

For the costumes, Lee recruited two-time Oscar® nominee Ruth Carter, who recently received notoriety on her work for Lee Daniels’ The Butler and with whom he has worked many times, to create a wardrobe that walks the same thin line between realism and the darkly fantastic that the film balances upon.