One for the Money is a 2012 comedy crime thriller film based on the 1994 novel of the same name, written by Janet Evanovich. Directed by Julie Anne Robinson, the screenplay was written by Liz Brixius, Karen McCullah Lutz and Kirsten Smith. It stars Katherine Heigl, Jason O’Mara, Debbie Reynolds, Daniel Sunjata and Sherri Shepherd. 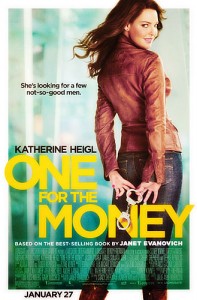 One for the Money, starring Katherine Heigl is based on the 1994 novel of the same name, written by Janet Evanovich

A proud, born-and-bred Jersey girl, Stephanie Plum’s (Katherine Heigl) got plenty of attitude, even if she’s been out of work for the last six months and just lost her car to a debt collector. Desperate for some fast cash, Stephanie turns to her last resort: convincing her sleazy cousin to give her a job at his bail bonding company… as a recovery agent. True, she doesn’t even own a pair of handcuffs and her weapon of choice is pepper spray, but that doesn’t stop Stephanie from taking on Vinny’s biggest bail-jumper: former vice cop and murder suspect Joe Morelli—yup, the same sexy, irresistible Joe Morelli who seduced and dumped her back in high school.

Nabbing Morelli would be satisfying payback—and a hefty payday—but as Stephanie learns the ins and outs of becoming a recovery agent from Ranger, a hunky colleague who’s the best in the business, she also realizes the case against Morelli isn’t airtight. Add to the mix her meddling family, a potentially homicidal boxer, witnesses who keep dying and the problem of all those flying sparks when she finds Morelli himself… well, suddenly Stephanie’s new job isn’t nearly as easy as she thought.

One for the Money was optioned by Tri-Star Motion Pictures shortly after being published and was in “pre-production” ever since. When asked about the status of the movie, Janet Evanovich commented, “Hard to believe they’ve been sitting on this multi-million dollar franchise for all these years but go figure.”

The film adaptation was produced by Tom Rosenberg for Lakeshore Entertainment, with Katherine Heigl playing the role of Stephanie Plum. The production shot in metropolitan Pittsburgh from July to early September 2010. Principal photography began the week of July 12, 2010, in the borough of Ambridge in suburban Beaver County, and continued in six different locations in the town. Pittsburgh’s Central Northside neighborhood as well as the recently shuttered UPMC facility in the inner suburb of Braddock, will double for the book’s setting of Trenton, New Jersey, neighborhoods and government buildings.

Pittsburgh’s Central Northside neighborhood, specifically the historic Garden Theater and burlesque district, was used in the film to recreate a gritty Trenton inner city neighborhood. It is the same block and buildings, complete with theater marquee, used in the 1979 sports/cult classic The Fish That Saved Pittsburgh as the office and home of the film’s astrologist heroine Mona (Stockard Channing).