After Laine’s (Olivia Cooke) childhood friend, Debbie (Shelley Henning), suddenly dies, Laine, alongside Debbie’s boyfriend, Pete (Douglas Smith), discovers an antique Ouija board in Debbie’s room and tries to use it to say “Goodbye” to her best friend. “Yes.” “No.” “Goodbye.” These words that are printed on a classic Ouija board seem so innocent. Find out what happens when a deadly presence refuses to say “Goodbye.” 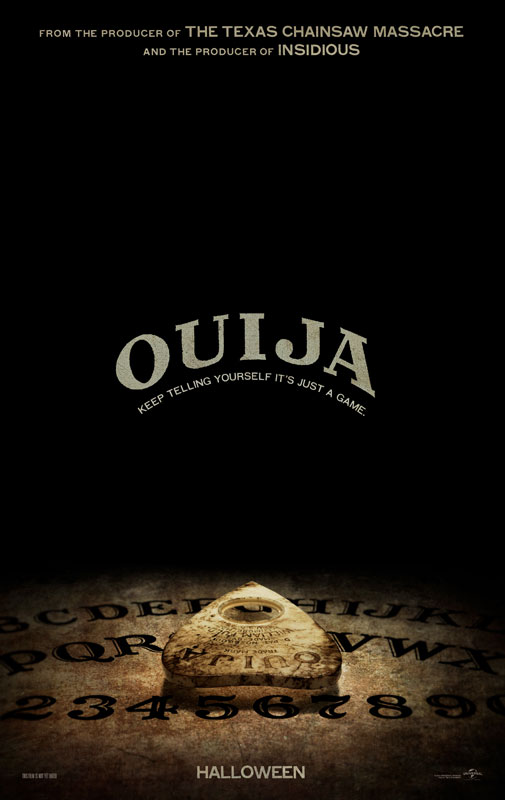 As Ouija is White and Snowden’s first film working within the Blumhouse model, they weren’t sure exactly what to expect. Filming a movie on a more abbreviated schedule may scare some, but both welcomed the process and outcome.

Several years ago, Hasbro and blockbuster producers Michael Bay, Andrew Form and Brad Fuller of Platinum Dunes approached Universal Pictures to discuss making Ouija as a microbudget film that explored the supernatural elements of the iconic board. Fellow powerhouse producer Jason Blum of Blumhouse Productions was brought on to complete the team—which includes Hasbro’s producer Bennett Schneir, who has a multipicture production deal with the company—and Ouija was a go.

Of the decision to make the film in this genre, Form surmises: “To have a device where you can talk to the other side is a perfect base for a horror movie.” After penning the films Knowing and The Possession, husband-and-wife team Stiles White and Juliet Snowden were eager to continue writing character-driven thrillers. When they were approached to craft the screenplay for Ouija, with the offer for White to make his directorial debut, it was just the project for which they were searching.

The Ouija board was imagined out of humanity’s intrinsic desire for answers to the seemingly inexplicable. So, when White and Snowden began writing, they knew they needed to first sort out their protagonist’s intense need. The more that the duo looked into the reactions following the loss of someone, and how traumatic death is for many of us, the more they found their story’s motivating force. With that driving the narrative, one young woman’s obsession with finding out what happened to her best friend was the clear through-line.

When casting Ouija, the filmmakers worked to select actors whose performances would make the film grounded in reality. Form shares: “We wanted the characters to feel like they were making real decisions. This is difficult to accomplish in a horror movie when your protagonist is walking up the stairs and you know she shouldn’t be. We wanted the audience to feel just as scared as the actors looked.”

The principal cast is composed of five friends, led by the fearless Laine, a high school student looking for answers. Filmmakers searched for a great deal of time for the best actress to fill the role. Little did they know, she was right in front of them…as a placeholder in White’s Ouija tone book. Though Laine’s insatiable curiosity leads her into dire situations in Ouija, Cooke admits she’s never used a Ouija board.

As soon as Cooke was selected, the filmmakers set out finding the supporting cast. First up, Laine’s devoted, albeit skeptical, boyfriend, Trevor, was cast. After seeing several actors audition for the role, Daren Kagasoff of TV’s The Secret Life of the American Teenager stood out as the clear choice.

Debbie’s home had to be perfect, even if it required the use of more than one location. It turned out that there was a neighborhood in Los Angeles that provided everything for which the filmmakers were searching. The exterior used for Debbie’s house was four houses away from the one used for the interior.