While on holiday in Marrakech, an ordinary English couple, Perry (Ewan McGregor) and Gail (Naomie Harris), befriend a flamboyant and charismatic Russian, Dima (Stellan Skarsgård), who unbeknownst to them is a kingpin money launderer for the Russian mafia. When Dima asks for their help to deliver classified information to the British Secret Services, Perry and Gail get caught in a dangerous world of international espionage and dirty politics. 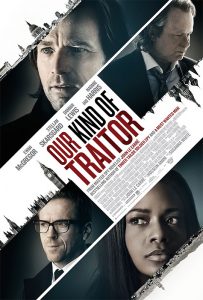 “One of the strengths of John le Carré’s work is that he incorporates very important themes into a rollercoaster ride of a thriller,” says screenwriter Hossein Amini of le Carré’s novel Our Kind of Traitor, which he has adapted into a major new feature film of the same name, directed by Susanna White.

Le Carré’s novels always drill with piercing acuity into the global issues of the day: the pharmaceutical industry in The Constant Gardener; the war on terror in A Most Wanted Man; in Our Kind of Traitor it is private finance and the impact of Russia ‐ specifically Russian money -­ on the entire spectrum of British society, from finance to politics to the streets of London, which comes under scrutiny.

Amini worked closely with le Carré on the first couple of drafts. “I would write and he’d give me notes,” says Amini of their collaboration. Susanna White also contributed a great deal to the screenwriting process, as did director Justin Kurzel who had been attached to an earlier version of the project.

“We were lucky enough to read the book prior to publication,” says Producer Gail Egan. “It was obvious straight away. It’s a great book. It’s a great story and it has great characters. It is very cinematic.”

“It was a very strong, very relatable story,” says producer Simon Cornwell, who is also le Carré’s son. “An everyman and an everywoman couple caught in a world that overwhelms them and charts their journey through that. It was a very natural to take to the screen.”

Set in London, Marrakech, Paris, Bern and the French Alps, BAFTA award‐winning director Susanna White was drawn to the very cinematic aspect of the story as well as its very contemporary outlook. “What made this stand out for me was that it is a very modern story,” she explains. “I have grown up with le Carré and most of his other stories have looked backwards into the past and been set in a world of darkish interiors. OUR KIND OF TRAITOR is a big road movie, travelling across five countries.”

“It is a le Carré for now,” she continues. “People in MI6 might now be working counter-­terrorism. I deliberately cast Khalid Abdalla, a Middle Eastern actor, to play Luke, because that is the MI6 we’ve got now. I hope it will make people think about the world that we live in.” Damian Lewis, who plays British MI6 agent Hector Meredith, explains it is as much a character piece as it is a suspenseful thriller. “It’s not a ‘who done it’, it’s more of a ‘can they do it?’”

Ewan McGregor was the first of the film’s high-­powered cast to join the project. “Ewan was on early and first as Perry,” says producer Gail Egan. “He was involved from quite an early stage of development and stayed with us through many drafts.”

“The thing we were keen on was the idea of a mixed race relationship,” says director Susanna White. “Again it was part of the idea I had to make le Carré feel very modern and very much a 21st century le Carré. You have this wonderful high achieving woman who happens to be black.”

Co­‐star Naomie Harris describes McGregor as the ideal co-star. McGregor repays Harris the compliment. “Naomie is a phenomenal actress.” For her part, Harris was energised to play a character she recognises as real.

Finding the right actor to play Dima was one of the most crucial elements of the project to get right. “One of the first things that drew me to the project was Dima,” admits White. “When I met David Cornwell, aka John le Carré, he started acting out Dima for me. He was really funny and charismatic and warm. You could sense the danger in him, but the big thing David said to me was he wanted Dima to be funny, and I loved that. I always love surprise in characters that they don’t play the one note suspected.” In Stellan Skarsgård, they found an actor capable of embracing this huge character.

White and Skarsgård put plenty of thought into the character of Dima’s wife, Tamara (Saskia Reeves) and their marriage. As written, there was very little of Tamara on the page. This gave the director and her two actors a lot with which to play.

“The great thing about doing le Carré is that everyone wants to work on it, so we were able to get real A-­‐listers in terms of heads of departments to come on board.” comments White. Those A­‐listers are cinematographer Anthony Dod Mantle, production designer Sarah Greenwood and costume designer Julian Day.

Our Kind of Traitor was shot for 10 weeks in spring 2014 in Finland, the UK, Paris, the French Alps, Bern and Marrakech. It used some 90 sets and filmed in around 50 different locations. The Russian exteriors were filmed in Finland, with the interior of the Bolshoi ballet recreated in London, and The Dorchester hotel standing in for the Bellevue hotel in Bern.