Acclaimed director Scott Cooper takes audiences on a vivid and intense journey into the heart of a fading American Dream in Out of the Furnace, as fate, family and loyalty drive an ordinary man to take heroic measures to fight for those he loves. 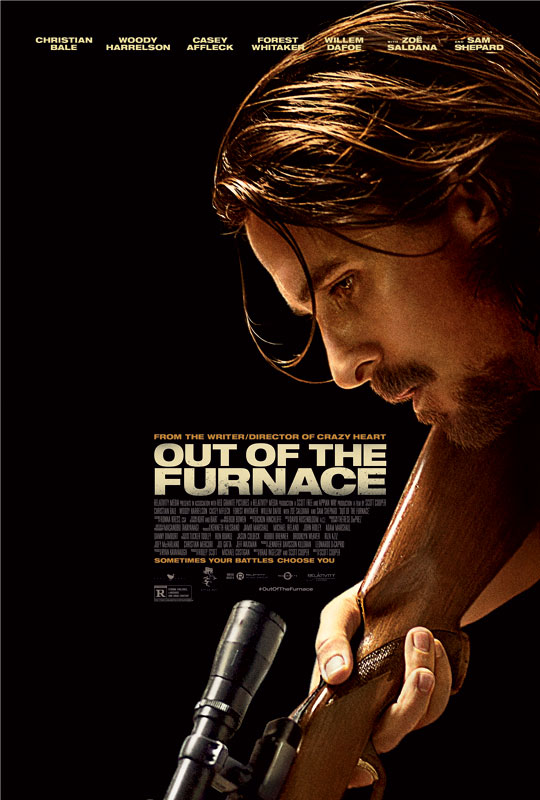 Executive producer Jeff G. Waxman: “The opening scene is one of the most shocking and violent scenes in the movie. It sets the stage for what comes next in the film”

The movie starts in 2008, when many in the military had their tours of duty extended multiple times without their consent. Cooper explores some of the darker corners of the American psyche, this time through the eyes of Russell and Rodney (Casey Affleck), an Iraq war vet unable to find an emotional or financial footing in the town in which he grew up.

Joining the cast immediately after completing The Dark Knight Rises, the third chapter in Christopher Nolan’s celebrated “Batman” franchise, Bale shed his character’s signature cowl and cape along with his larger-than-life bravado to play the role of an everyday hero.

Having Bale on board helped attract other top-tier talent to the project. “Christian proved to be an actor magnet, of course,” says Cooper. Casey Affleck remembers reading the script without any expectations and finding himself enormously moved and surprised by it. “It is an unusual script. It feels very real and the stakes are very high,” Zoë Saldana says that once she began reading the script, she couldn’t put it down. “When I finished reading it, I just wanted to be a part of it.”

The role of Braddock’s sheriff, Wesley Barnes is played by Academy Award® winner Forest Whitaker. “Forest is one of our great actors,” says Cooper. “He really understands character and story, which makes him a wonderful director himself.” The actor is extremely selective about the roles he accepts and he was eager to work with Scott Cooper on this film.

Out of the Furnace was shot entirely on location in and around Braddock, Pennsylvania, a former steel-industry hub that suffered a dramatic economic decline during the 1980s. Because of his deep desire for authenticity, Cooper has never shot on a soundstage. “I always want my actors to experience the verisimilitude that you can only find on location. Braddock drips with atmosphere. For example, the Carrie Furnace is a very important set piece that no Hollywood designer could replicate.”

Production for Out of the Furnace took place on an extremely tight schedule, with only 34 shooting days. The highly skilled and committed crew, mostly local hires, kept things running smoothly.