Paddington follows the comic misadventures of a young Peruvian bear who travels to London in search of a home. Finding himself lost and alone at Paddington Station, he begins to fear that city life is not all he had imagined – until he meets the Brown family. They read the hand-written label around his neck (‘Please look after this bear. Thank you.’) and offer him tea, a name and a roof over his head. 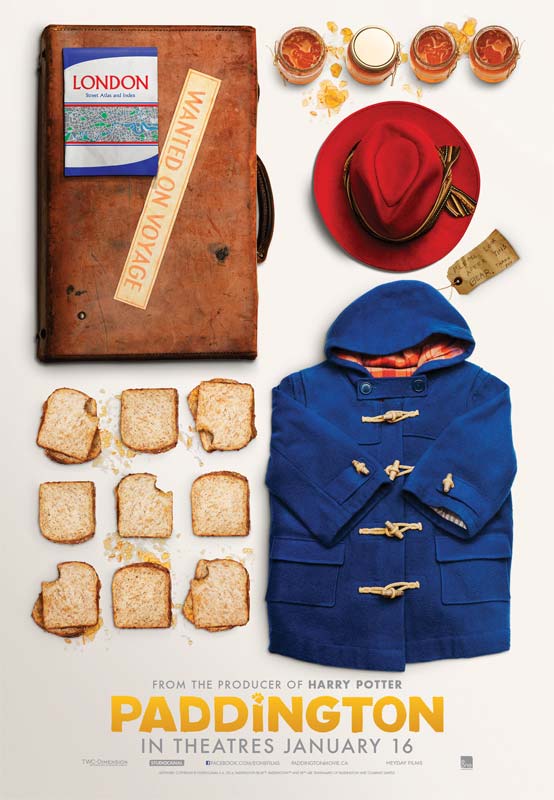 The English weather was surprisingly kind to the film crew as they shot through the early winter months of 2013. Chalcot Crescent, in London’s exclusive Primrose Hill, plays a starring role as Windsor Gardens, home to the Brown family and their crotchety next door neighbour, Mr. Curry.

Paddington is based on the best-selling and internationally adored series of children’s stories by British author Michael Bond, from an original screenplay by filmmaker Paul King. Paddington is directed by the twice BAFTA- nominated King and produced by multiple award-winning David Heyman.

One of the most important decisions made by the filmmakers was that of the voice of Paddington. By the spring of 2014, acclaimed British actor Colin Firth had been working on the project for some time. King takes up the story: “We all realised that Paddington required a lighter and younger voice – not quite so tall, dark and handsome!” Thus, it was decided – “over a cup of tea and a marmalade sandwich” as Paul puts it – that Colin would graciously and agreeably step away from the project.

The cast of Paddington is led by acclaimed British talent, Ben Whishaw as the voice of Paddington, Hugh Bonneville as uptight patriarch Mr. Brown and Sally Hawkins as the kindly and free-spirited Mrs. Brown. Starring alongside them is Nicole Kidman as Millicent, a sinister taxidermist with her eye on Paddington, Jim Broadbent as Mr. Gruber, antique shop owner and wise mentor, Julie Walters as Mrs. Bird, the Browns’ eccentric housekeeper, and Peter Capaldi as Mr. Curry, their crotchety, curtain-twitching neighbour.

Nicole Kidman, who has embraced playing the deliciously evil Millicent explains, “I had to tell my daughters I wasn’t playing Paddington Bear’s mummy – that I’m playing the person that’s trying to, you know, stuff the bear – which is just horrible!”. She continues, “But I loved the script so much, so that really was the driving force for me. That and the fact I’d been looking for something that my children could come and see and we could enjoy together.”

Following a preliminary shoot on location in Costa Rica in April 2013, Principal Photography on Paddington commenced in September 2013. Comprising a 51-day schedule, the film was shot on location in and around central London, as well as on the iconic soundstages of Elstree and Leavesden film studios, where everything from the Natural History Museum’s rooftops to the cosy interior of a Portobello Road antiques shop were recreated in stunning detail.

Perhaps the biggest challenge for Gary was shooting outdoors and in public: “I can control the sets in a studio, but I can’t control London!” That said, the production was met with open arms at every turn, as this famous bear once more proved dear to the hearts of so many – enormously helpful leverage when it comes to closing a platform of a major train station, re-dressing stately homes, taking over national museums and filming at working shipyards! As the director is keen to point out, “Nothing was ever a problem, everyone did so much to accommodate us and help us and let us do all sorts of things that we really shouldn’t have been doing! Something in Paddington definitely brings out people’s most helpful natures.”