Magnolia Pictures, Participant Media and HISTORY Present Page One: Inside the New York Times, directed by Andrew Rossi, produced and written by Kate Novack and Rossi which premiered at the 2011 Sundance Film Festival. The film was also produced by Josh Braun, David Hand, Alan Oxman and Adam Schlesinger. The executive producers are Daniel Stern and Daniel Pine. 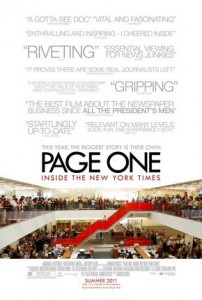 PAGE ONE unfolds at a crossroads for news coverage in America. The old business models of print and broadcast are dying, but no truly sustainable new ones have yet emerged to take their place.

In the tradition of great fly-on-the-wall documentaries, Page One: Inside the New York Times deftly gains unprecedented access to The New York Times newsroom and the inner workings of the Media Desk. With the Internet surpassing print as our main news source and newspapers all over the country going bankrupt, PAGE ONE chronicles the transformation of the media industry at its time of greatest turmoil. Writers like Brian Stelter, Tim Arango and the salty but brilliant David Carr track print journalism‘s metamorphosis even as their own paper struggles to stay vital and solvent. Meanwhile, their editors and publishers grapple with existential challenges from players like WikiLeaks, new platforms ranging from Twitter to tablet computers, and readers‘ expectations that news online should be free.

But rigorous journalism is thriving. PAGE ONE gives us an up-close look at the vibrant cross-cubicle debates and collaborations, tenacious jockeying for on-the-record quotes, and skillful page-one pitching that produce the ―daily miracle‖ of a great news organization. What emerges is a nuanced portrait of journalists continuing to produce extraordinary work—under increasingly difficult circumstances.

At the heart of the film is the burning question on the minds of everyone who cares about a rigorous American press, Times lover or not: what will happen if the fast-moving future of media leaves behind the fact-based, original reporting that helps to define our society?

Filmmakers Andrew Rossi and Kate Novack (LE CIRQUE: A TABLE IN HEAVEN) gain unprecedented access to the Times’ long-hidden inner sanctum for a year, just as the paper is confronting newsroom lay-offs, the game-changing emergence of WikiLeaks, and questions about whether the newspaper itself could go bankrupt as print outlets across the country collapse. The result is an exhilarating view into a world where Old School values are colliding–and sometimes converging–with a new future.