The high stakes thriller Paranoia goes deep behind the scenes of global success to a deadly world of greed and deception.  The two most powerful tech billionaires in the world (Harrison Ford and Gary Oldman) are bitter rivals with a complicated past who will stop at nothing to destroy each other. 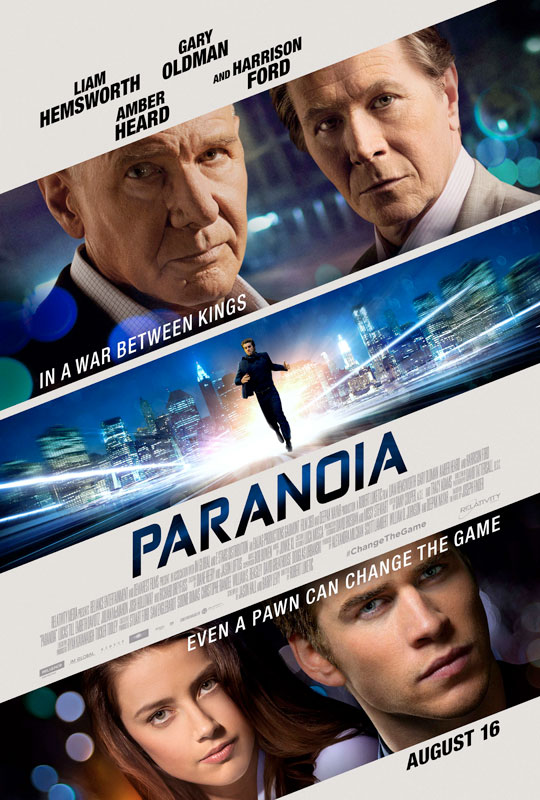 Paranoia, directed by Robert Luketic, from a screenplay by Jason Hall and Barry L. Levy is based on the New York Times bestselling book by Joseph Finder.

Paranoia began with Joseph Finder’s New York Times best-selling techno-thriller novel of the same name.  The book hit upon what would soon become some of the biggest questions of our times:  Has corporate power grown out of control? Where is the line between mining digital data and dangerous, invasive surveillance?

Producer Alexandra Milchan read the book and was inspired to bring the story hurtling into the even starker realities of the 2013 corporate world – at the bottom rungs of which a savvy, wired youth culture is confronting a changing digital reality and tough economic times.  Using the initial script by Barry L. Levy, director Robert Luketic and Milchan spent months developing a draft with Jason Hall, to expand on these themes.

Taking the role of Adam Cassidy is Liam Hemsworth, the Australian up-and-comer who recently garnered global attention playing Gale in the blockbuster The Hunger Games.  The filmmakers saw in him all the qualities of both youthful, daring and hard-won integrity they were looking for in Adam.   “He’s gorgeous, charismatic and charming, but Liam is also very accessible,” says Producer Alexandra Milchan. Robert Luketic was equally impressed.

Harrison Ford was drawn not only to reuniting with Gary Oldman but to the rich themes of Paranoia.  “I see it as a cautionary tale of a young man led by blind ambition into a trap.”