Parkland recounts the chaotic events that occurred in Dallas, Texas, on November 22, 1963, the day President John F. Kennedy was assassinated. Written and directed by Peter Landesman and produced by Playtone partners Tom Hanks and Gary Goetzman, Bill Paxton and Exclusive Media’s Nigel Sinclair and Matt Jackson, Parkland is the ferocious, heart-stopping and powerful untold true story of the people behind the scenes of one of the most scrutinized events in history. 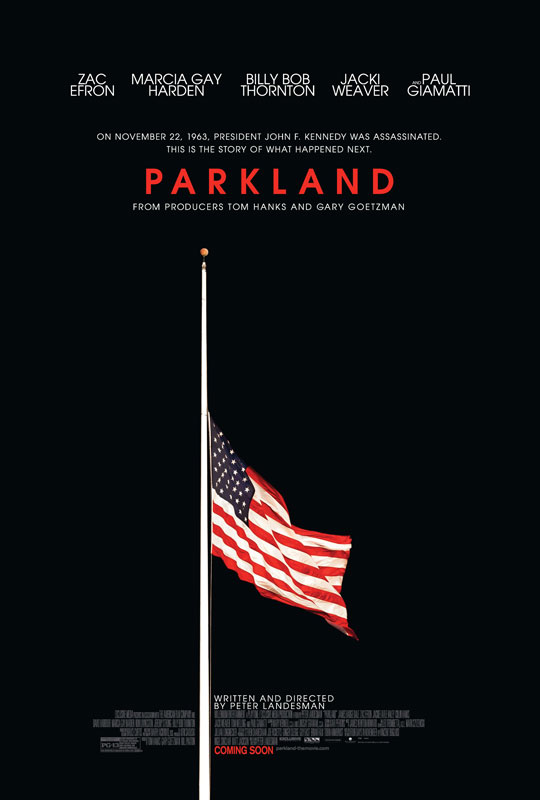 The idea for the film began in a conversation between actor, director and producer Tom Hanks, producer Gary Goetzman, and actor Bill Paxton. “We were at a baseball game and the Kennedy assassination came up,” says Goetzman. “Bill is fascinated by all of the theories about it. He is from Fort Worth and remembers seeing Kennedy speak there on the day of the assassination.”

Investigative journalist Peter Landesman, an award-winning writer, was already at work on a feature script for Playtone about the Watergate scandal and the mysterious whistleblower known as Deep Throat. Approaching him to develop a script inspired by Bugliosi’s book just seemed to make sense to the producers. As he began to condense his narrative, Landesman found himself strongly drawn to one particular thread in the saga. “I looked at the script and asked myself what the engine of the story was. What had no one ever seen before? No one had ever seen what happened inside Parkland Hospital. With that, the rest fell into place.”

The script for Parkland, with more than 80 speaking roles, quickly became a must-read script in Hollywood, attracting the attention of Oscar winners, veteran players and up-and-coming young performers alike. Landesman’s intensive research and detailed writing created the kinds of rich and varied characters that are any actor’s dream to play, and a Who’s Who of Hollywood elites soon lined up for the project.

As Forrest Sorrels, head of the Secret Service in Dallas, Academy Award-winner Billy Bob Thornton provides an anchor for the multiple stories threaded through the film. “Billy Bob is someone we were dying to work with,” says producer Steve Shareshian, head of production for Playtone.

The first production meeting for Parkland took place in July 2012. Principal photography began on January 12, 2013, and was completed in just 24 days, all but one in Austin, Texas. “It was lightning in a bottle,” says Peter Landesman. “We were so lucky to get such incredible personnel starting with director of photography Barry Ackroyd, who was nominated for an Oscar for his work”

Parkland actually filmed only one day in the city of Dallas. The Dealey Plaza scenes had to be shot while working around extensive refurbishment efforts taking place to ready it for the 50th anniversary of the assassination, as well as a torrential rainfall.