In a gripping true story set during the height of the Cold War, American chess prodigy Bobby Fischer (Tobey Maguire) finds himself caught between two superpowers when he challenges the Soviet Empire, whose players have dominated the game for decades. 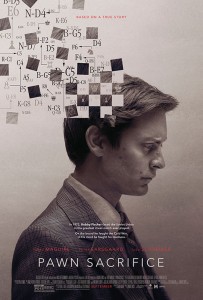 To accurately replicate the games played in Reykjavík, the filmmakers brought in Richard Berubé, head of the Quebec Chess Federation, as an advisor.

Post-World War II tensions between the two superpowers were heightening and playing out in disparate arenas, producer Gail Katz says. “There was the space race, Vietnam, China, the Cuban Missile Crisis – then in 1972, improbably, we were fighting it out on the chess board. The match became a symbolic battle over which system of government was superior.  Considering the events’ historical significance and Bobby’s mystique, I saw this as the perfect subject for a movie. The more I read about the outlandish details of the match, the better the story became.”

Katz pitched her idea to actor Tobey Maguire, who was immediately intrigued. After some initial research, he signed on not only to star as Fischer but also to produce, and he and Katz began to develop the script together. Maguire proposed approaching it like a classic sports story. Katz and Maguire brought in veteran British screenwriter Steven Knight to pen the screenplay. “He wrote a script that knocked our socks off,” says Katz. “It struck a brilliant balance of Cold War politics and gripping personal drama.”

In preparing to write the script, Knight read many of the books that have been written about Fischer and the “Match of the Century,” as well as speaking with people who knew him. “The most useful material was archival footage of him being interviewed,” says the screenwriter.

Maguire and Katz brought in Academy Award®-winning producer and director Edward Zwick to helm the film. “A lot of top directors were interested,” Katz says. “We knew Ed had a history of doing historical pictures with great accuracy that were also very commercial. He knows how to make a truthful and compelling film.” Zwick immediately clicked with the sports analogy that Maguire and Knight had woven through the screenplay.

If Fischer was a less-than-ideal person to represent the United States, Boris Spassky was no more appropriate a representative of the Soviet Union. At the top of Katz’s wish list to play Spassky was Liev Schreiber. Zwick had worked with Schreiber previously on the World War II action drama Defiance. Schreiber says he became of fan of Spassky as a child because his mother admired him. As Spassky, Schreiber was required to play all of his scenes in Russian—a language he does not speak. “He’s extraordinary,” says Zwick. “He worked with a Russian teacher learning his lines and is so exacting that the Russian speakers on set were amazed.”

Gail Katz and Tobey Maguire took a calculated risk when they decided to produce Pawn Sacrifice outside the Hollywood studio system. “It was sometimes a hard road, but very satisfying in the end,” says Katz. “On a very small budget, we have been able to make a movie that feels like a big studio picture. It spans three decades, it covers the planet, it has a lot of moving parts and a big cast.”

To stand in for the far-flung settings of Pawn Sacrifice, which include Brooklyn, Santa Monica and Reykjavík, the filmmakers decided to shoot in Montreal. “It has a wealth of extraordinary and varied architecture from the 1960s and ’70s,” says Zwick. “There was a lot for us to take advantage of. The University of Montreal stood in for some of our Icelandic interiors. There are also neighborhoods full of brownstones that look very much like Brooklyn, and even a park that looks like Washington Square. Once we had Washington Square, we knew we were all set.”