In Pixels, when intergalactic aliens discover video feeds of classic arcade games and misinterpret them as a declaration of war, they attack the Earth, using the video games as the models for their assaults — and now-U.S. President Cooper must call on his old-school arcade friends to save the world from being destroyed by PAC-MAN™, Donkey Kong™, Galaga™, Centipede®, and Space Invaders™. 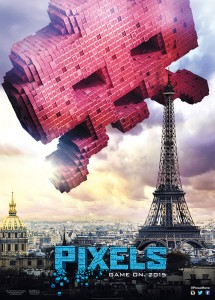 As part of creating the arcade for the championship sequence, the production design team procured hundreds of original arcade game cabinets from all over the country. Each cabinet was completely refurbished, as many of them had three or four layers of screen printing that had to be removed.

After developing the project at Happy Madison, the filmmakers  began to seek a director who could shepherd it to the screen. “We thought Chris Columbus would be the perfect director for this movie,” says producer and Allen Covert.

To capture the comedy, the Happy Madison and 1492 filmmakers brought in an all-star cast of comedic film talent. Adam Sandler, who also produces the film, as well as Kevin James, Michelle Monaghan, Peter Dinklage, and Josh Gad make up the team of unlikely heroes who are called upon to save the world. Says Columbus. “There’s a natural camaraderie and real charisma between the five of them. They truly create a team.”

Production Designer Peter Wenham, who was responsible for the overall look of the film, was the initial player in orchestrating the ways that the look of the iconic videogame characters would transition from their classic 8-bit forms to fully realized 3D threats. There was always a danger, Wenham says, of the 3D versions of the 8-bit characters looking too blocky or uninteresting.  That’s when they hit on the idea of the characters containing a light aura – an idea that could be replicated as they pixelate the everyday objects on Earth.   The result was a visually compelling solution that also expressed the way that the aliens use videogames to attack the planet.

Once the characters had been designed, Columbus tapped Matthew Butler, the visual effects supervisor, to bring the classic 1980s videogames into our world.

Of course, the filmmakers did take some liberties with the real history. For example, the fictitious history of the Galaga game in the film – in which a “‘glitch” in the game is a key plot point – is a purely fictional element which was created for dramatic purpose. If you want to get technical about it, Butler says, the title of the film isn’t quite right.  “A 3D pixel is really called a ‘voxel,’” a cube in three-dimensional space, he says.

Bringing Q*bert to life represented another kind of challenge.  “Like the other characters, he’s made up of sharp-edged cubes, but he had to be cute,” says Butler.  “Sony Picture Imageworks came up with a great translucent solution that gives him almost a furry look, like you could cuddle him while still keeping him pixelated.  He doesn’t have hands or a mouth, so it was a challenge to use just his eyes and body posture to bring Q*bert’s character to life.”

In addition to designing the look of the characters, Peter Wenham was responsible for sets and locations – all aspects of the look of the film.  “The movie is very much about a heightened reality – that comes out of the arcade games – so we tried to imbue this film with some real reality,” he says.