In Alcon Entertainment’s fast-paced, high-adrenaline action thriller “Point Break,” a young FBI agent, Johnny Utah (Luke Bracey), infiltrates a cunning team of thrill-seeking elite athletes, led by the charismatic Bodhi (Edgar Ramirez). The athletes are suspected of carrying out a spate of crimes in extremely unusual ways. Deep undercover, and with his life in imminent danger, Utah strives to prove they are the architects of this string of inconceivable crimes. 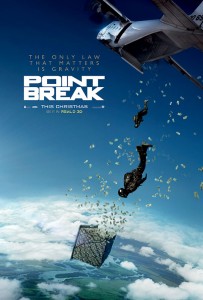 Big wave surfing is featured near the beginning and again at the end of the film. The first sequence, set off the coast of France, was actually captured near Tahiti, French Polynesia, at the famed Teahupoo break in the Pacific where, in September 2014, swells were mountainous.

The idea for a 2015 “Point Break” began in the best possible place: in the hearts of true fans. “The first ‘Point Break’ was amazing, inspiring. We all loved it and were influenced by it,” says director Ericson Core, whose intent was to honor its original premise and themes while pushing the story’s physical limits to the wall…and then going over that wall by taking it to another level in ways that would have been impossible 25 years ago. “We wanted to use that inspiration to bring our own vision of ‘Point Break’ to the screen, expanding it on a global scale, with today’s most extreme, world-class athletes driving the action.”

Enlarging the story beyond the exploits of daredevil surfers pursuing an endless summer on the California coast, the new film commands a worldwide stage. Touching down in 11 countries across four continents, it offers a rare look into what it means to be an extreme athlete today, by incorporating the most stunning exhibitions of motocross, skydiving, wingsuit flying, snowboarding, free climbing and, of course, big-wave surfing, executed by those who have dedicated—and risked—their lives to perfect these jaw-dropping feats, many of which have never been seen before in a feature film.

“On a scale of one to 10, 10 being the max, I’d rate the action at 45,” says Edgar Ramirez, starring as Bodhi. “It was a revelatory experience. What these guys do is beyond incredible.”

The filmmakers reached out to prominent athletes across a range of sports, enlisting them not only as performers in lieu of traditional stunt men, but as technical advisors and stunt coordinators in their particular disciplines, as well as a number of fun cameos. Producer Christopher Taylor notes, “The stunts and action are so integral to this movie that we had to have the cooperation and contributions of people who actually participate in these sports. What audiences will see is real, and that meant it first had to pass the test with the athletes, themselves. That was our goal and our benchmark from the start.”

Rick King, along with W. Peter Iliff, was a writer on the first film and shares story credit again with Iliff and with the new “Point Break” screenwriter and producer Kurt Wimmer. The new film also introduces a strong female role, Samsara, played by Teresa Palmer, whom Core calls “extraordinary, incredibly beautiful and fearless,” much like the character she plays. While not an elite athlete herself, Samsara has honed certain skills enabling her to keep up with Bodhi and his crew, which required the actress to expand her physical repertoire. Core jokes, “Being Australian, she took the rub-some-dirt-in-it approach, willing to do anything. She did scenes underwater and on a surfboard, she climbed, she really embraced the role in all its facets and ran with the Wolf Pack.”

Meanwhile, as Utah’s undercover work with Bodhi’s gang takes him from one remote outpost to another, his FBI lifeline consists of his home office supervisor, Instructor Hall, played by Delroy Lindo, and his covert field contact, Pappas, played by Ray Winstone. Both Hall and Pappas see promise in the young recruit and genuinely want him to succeed. They find his audacity a plus. Still, they have their reservations.

Core’s mandate to ground everything in the reality of the outdoors, meant shooting exclusively on location. With principal photography starting in June 2014 in Berlin, Germany, and wrapping in November, in Italy, everyone was living out of a suitcase for months. Production designer Udo Kramer’s challenges revolved around the ever-changing weather and environs, and his efforts to lend cohesion to a production encompassing upwards of 70 separate locations.