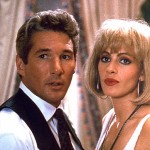 Pretty Woman was pitched to Touchstone Pictures and re-written as a romantic comedy. The original script was titled $3,000. (This title was changed because executives at Touchtone thought it sounded like a title for a Science Ficton film.) It also has unconfirmed references to That Touch of Mink, starring Doris Day and Cary Grant.

Pretty Woman’s plot centers on down-on-her-luck Hollywood prostitute Vivian Ward who is hired by a wealthy businessman, Edward Lewis, to be his escort for several business and social functions, and their developing relationship over the course of Vivian’s week long stay with him.

Originally intended to be a dark drama about prostitution in New York, the film was reconceptualized into a romantic comedy with a broader budget.

The film was a critical success and became one of 1990’s highest grossing films, and today is one of the most financially successful entries in the romantic comedy genre, with an estimated gross of $464 million USD.Roberts received a Golden Globe Award for her role, and received a nomination for an Academy Award, in addition screenwriter J.F. Lawton was nominated for a Writers Guild Award and a BAFTA Award.

The film was followed by a string of similar romantic comedies, including Runaway Bride (1999), which re-united Gere and Roberts under the direction of Garry Marshall once again.

Pretty Woman was initially conceived to be a dark drama about prostitution in Los Angeles in the late 1980s. The relationship between Vivian and Edward also originally harboured controversial themes, including the concept of having Vivian addicted to drugs; part of the deal was that she had to stay off cocaine for a week, because she needed the money to go to Disneyland.

Edward eventually throws her out of his car and drives off. The movie was scripted to end with Vivian and her prostitute friend on the bus to Disneyland.

These traits, considered by producer Laura Ziskin to be detrimental to the otherwise sympathetic portrayal of her, were removed or incorporated into the character of Vivian’s friend, Kit.

These “cut scenes” have been found in public view, and some were included on the DVD released on the movie’s 15th anniversary. One such scene has Vivian offering Edward, “I could just pop ya good and be on my way”, indicating a lack of interest in “pillow talk”. In another, she is confronted by drug dealers outside The Blue Banana, and rescued by Edward and Darryl.