Ready (Hindi: रेडी, Reḍī) is an Indian comedy film directed by Anees Bazmee, starring Salman Khan and Asin in the lead roles. It also features Paresh Rawal, Arya Babbar and Mahesh Manjrekar in supporting roles, while Ajay Devgan, Sanjay Dutt, Kangana Ranaut, Zarine Khan and Arbaaz Khan will make cameo appearances. The film is a remake of the 2008 Telugu film Ready directed by Sreenu Vaitla starring Ram and Genelia. The music is given by Pritam. The first look of the film was unveiled on 5 April 2011, while the theatrical trailer was released on 15 April 2011. 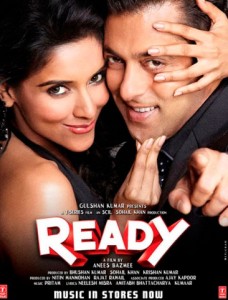 Ready is a remake of the 2008 movie Ready

The film is basically about a happy-go-lucky young man Prem (Salman Khan) who helps lovers in distress. Once he mistakenly helps a girl Sanjanna (Asin) escape from marriage and later falls for her. The film revolves around how he unites the families of the girl and himself.

The film was originally to be shot in Mauritius.However on the request of Salman Khan, the location was changed to Sri Lanka.Khan described his decision to choose Sri Lanka as its close proximity to India and its suitable landscape for Indian productions.

The film’s shooting started on 20 June 2010 in Colombo. The first schedule of shooting lasted for over 27 days at locations in Colombo and the neighboring Bentota,during which approximately 40% of the filming was completed.The second schedule of shooting was slated to start in October 2010, but was delayed due to eye problems faced by Salman Khan. The lead actor requested Anees Bazmee to delay the shoot until the condition of his eye improves.

The shooting started again in Mumbai from November 3, 2010.Portions of the film were shot at Film City in Mumbai and Cherish Studios at Madh Island in the North of Mumbai.[16] During filming, media reports emerged that Asin had shot for an intimate scene for the film,though the reports were later denied by the actress.

The final schedule of shooting started in February 2011 in Bangkok.According to reports, actors Ajay Devgan, Sanjay Dutt and Kangna Ranaut, who were shooting in Bangkok for David Dhawan’s film, Rascals were called by Salman Khan to become part of the movie. The trio shot for a day and will be seen doing cameo appearances in the film. Arbaaz Khan and Zarine Khan were also confirmed to have shot for small cameos in the film. The final schedule of shooting was completed in March 2011.

Two songs from the film, “Character Dheela” and “Dhinka Chika”, which were filmed in Bangkok were re-shot in Mumbai’s Film City studios. According to producer Bhushan Kumar, “the whole [production] team felt that the visuals didn’t suit the song.” The song “Character Dheela”, which features Salman Khan and Zarine Khan in a cameo appearance, is a tribute to veteran actors Raj Kapoor, Dilip Kumar and Dharmendra.

The film’s release date was first set as 27 May 2011 but was later pushed back to 3 June 2011.The theatrical rights of the film for the Indian and overseas markets were sold for a sum of