Real Steel is an American science fiction film starring Hugh Jackman and directed by Shawn Levy. The film is based on the 1956 short story “Steel” by Richard Matheson, though Levy replaced the story’s dystopian setting with U.S. state fairs and other “old-fashioned” Americana settings. 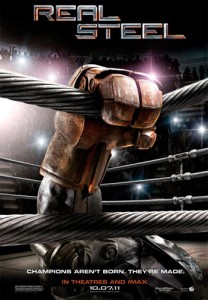 Real Steel was scheduled to be released on October 7, 2011. It was initially scheduled for release on November 18, 2011, but moved earlier to avoid competition with the first part of The Twilight Saga: Breaking Dawn.

Real Steel was in development for several years before production began in June of 2010. Filming took place primarily in the U.S. state of Michigan. Animatronic robots were built for the film, and motion capture technology was used to depict the brawling of computer-generated robots. Real Steel is scheduled to be released in both conventional and IMAX theaters on October 7, 2011.

The original screenplay was written by Dan Gilroy and was purchased by DreamWorks in 2005 for $850,000, or in 2003 (sources differ). The project was one of 17 that DreamWorks took from Paramount Pictures when they split in 2008.

Director Peter Berg expressed interest in the project in mid-2009 but moved on. Levy was attached to the project in September 2009, and actor Hugh Jackman was cast in the starring role in November. In the same month, Steven Spielberg and Stacey Snider at DreamWorks greenlit the project. Variety said insiders reported a budget of $80 million. Les Bohem and Jeremy Leven had worked on Gilroy’s screenplay, but in 2009, John Gatins was working on a new draft.

When Levy joined the project, he worked with Gatins to revise the screenplay. Levy chose to set the film in state fairs and other “old-fashioned” Americana settings that would exude nostalgia and create a warmer tone for the film’s father-son story.

Filming began in June 2010, taking place primarily in Michigan. Filming there was ended by October 15, 2010.Locations include areas around Detroit and across the state. Jason Matthews of Legacy Effects, successor to Stan Winston Studios, was hired to turn production designer Tom Meyer’s robot designs into practical animatronic props, saying, “We have 26-and-a-half total live-action robots that were made for this film. They all have hydraulic neck controls. Atom has RC [radio-controlled] hands as well.”

For scenes when computer-generated robots brawl, motion capture technology was used. Boxing hall-of-famer Sugar Ray Leonard was an adviser for these scenes.