Red Dawn is a re-boot of the 1984 box office cult-classic hit film that made stars of Patrick Swayze, Charlie Sheen. The timing on the release of that action film couldn’t have been better; it was in an era when the Cold War was still kicking and then-President Ronald Reagan was calling the Soviet Union the “evil empire.” 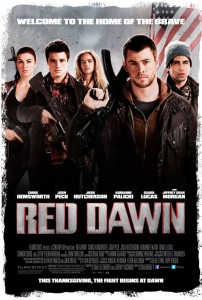 The filmmakers needed to separate 2012’s version of the film from the 1984 original “Red Dawn”. According to Vinson, “2012 is a completely different world than it was in 1984. So the fundamental geo-political world had to be recognized in our movie. And we accomplished that.

Now under the direction of first-time director Dan Bradley, the 2012 release boasts a cast of Hollywood’s new up and coming actors including Chris Hemsworth, Josh Peck, Josh Hutcherson, Adrianne Palicki, Isabel Lucas, Connor Cruise and Jeffrey Dean Morgan. And now, the timing of this re-boot couldn’t be better.

The essential themes of the original remain the same fighting for what you believe in and protecting your homeland. Home on leave from the Marines, Jed Eckert (Hemsworth) and his brother Matt (Peck) have the initial instinct to fight back when their small town is attacked by North Korean soldiers- a different take from the Soviet Union invasion of the original film. The brothers and their friends form an insurgent group to take their fight to the streets in a valiant attempt to outwit and overcome the intruders, save their homes and their country, and take back their freedom.

Producer Tripp Vinson says, “The re-boot is heavily inspired by the original. There are a lot of fans out there that loved the original, but we spent a lot of time thinking about the story and how to augment it to make it work in today’s world. I think we’ve done a pretty good job of it.”

The decision to re-boot Red Dawn at this time had a lot to do with a multitude of political situations in the world today. According to producer Beau Flynn, “In the eighties, we all had that Cold War fear and the tension built-up between Russia and the United States. But right now, it can feel like we’re living in an erratic world and with the fear that anything can happen. People now think they need to be prepared and ready for something. And that’s what I think Red Dawn taps into; the idea of fighting for what you believe in and fighting for your home. What would you do if your hometown or your country was invaded: Do you fight or do you flee? And that to me is really what this film is about.”