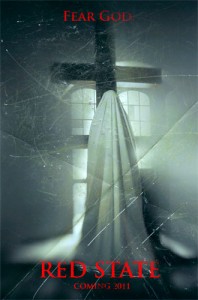 For months, Smith promised that the rights to the film would be auctioned off to a distributor at a controversial event to be held after its premiere at the Sundance film festival, but instead Smith purchased the film himself which, according to analysts, “might have been a difficult sale for any distributor.” Smith plans to self-distribute the picture under the “Smodcast Pictures” banner with a traveling show in select cities, before officially releasing the movie on October 19, 2011. Kevin Smith listed Mel Gibson as his inspiration for how he planned to distribute this movie, citing Gibson’s The Passion of the Christ as an example of a successfully self-distributed movie.

Throughout the months of November and December, teaser posters were released featuring characters from the movie in auctions via his Twitter account with the winning bidder hosting the poster exclusively on their website, while the money raised by the auction went to charity. Smith released a teaser trailer for the film on December 23, 2010.

Although Kevin Smith planned to auction off the rights to Red State to distributors attending his Sundance screening of the film, he changed his mind and informed his audience that he was unable to continue to use the festival to look for a distributor for the film after the audience’s reaction to his film. Smith plans to self-distribute as a traveling roadshow beginning March 5 at Radio City Music Hall, and would tour the film across North America before releasing Red State into cinemas through his Smodcast Pictures label on October 19 (the 17th anniversary of the release of Clerks).

Controversy soon erupted after Kevin Smith’s public behavior during the film’s debut screening at Sundance. Although Smith has decided to self-distribute the film, according to the film’s producer Jonathan Gordon the option of self-distributing the movie wasn’t considered an option at first.