Red Tails is an 2012 action drama film directed by Anthony Hemingway, from a screenplay by John Ridley and Aaron McGruder. The story, written by Ridley, is inspired by true events. This movie stars Cuba Gooding, Jr.  and Terrence Howard. 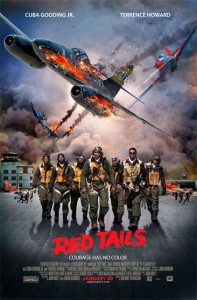 Red Tails is a high-flying action adventure film inspired by the heroics of the first all-African American aerial combat unit to serve in World War II.

The action-packed movie places viewers in the cockpits of nimble fighter planes in the thick of aerial combat, takes them into the tension-filled halls of the Pentagon as the military brass debate the risks of using black pilots in battle, and invites them to experience the camaraderie of the young hotshot Tuskegee Airmen as they serve with excellence. It is an inspiring tribute to real American history told in an exciting, fast-paced style.

In the Lucasfilm tradition of awe-inspiring thrill rides and engrossing storytelling, Red Tails boasts vividly detailed production values, cutting edge visual effects, and all-enveloping sound. Red Tails stands as a rousing tribute to real heroes, and is a film crafted by hundreds of talented people, including Skywalker Sound and the team at Industrial Light & Magic who supervised 7 visual effects houses around the world.

George Lucas and his team pored over many scripts over the years as they searched for the right balance between airborne action, grounded drama, and the fellowship amongst young men. “It’s a big story and if we attempted to depict everything, we’d end up with a ten-hour movie,” Lucas says. Ultimately, screenwriters John Ridley (U-Turn, Three Kings, Undercover Brother) and Aaron McGruder (Boondocks) focused their efforts on the exploits of the heroic 332nd Fighter Group based out of Ramitelli Airfield in Italy in 1944, as well as the happenings within the halls of the Pentagon that saw that group put into action.

“It boils down to a bunch of young men thrust into an incredible situation who, against all odds, do a phenomenal job and come out heroes – they’re really the knights of the contemporary age,” says George Lucas.

“I’d like for every person, young or old, to walk away from the film feeling that anything is possible,” says Anthony Hemingway. “Dedication, sacrifice, courage, daring and excellence are qualities that the Tuskegee Airmen displayed, but the presence of them are not limited to any group. I’d hope that people see the value in the bond and love that these men shared and that it’s possible for us all. Red Tails is a celebration. It’s a celebration of life and a celebration of breaking down barriers.”