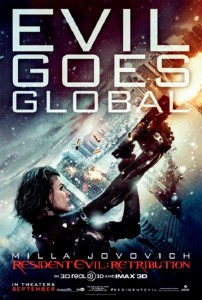 Originally, Anderson planned to film a fifth and sixth Resident Evil film back-to-back, but later decided that a sixth film will only be made based on the success of Retribution.

Resident Evil: Retribution is a 2012 science-fiction thriller film written and directed by Paul W. S. Anderson. It is the fifth installment in the Resident Evil film series, based on the Capcom survival horror video game series Resident Evil, and the third to be directed by Anderson. The film has many returning actors and characters, along with new characters from the video game not featured in the previous films. Filming took place from October to December 2011.

An element from the fourth video game called Las Plagas parasite will play a part in the film and will allow the undead to “run around, ride motorbikes, and shoot machine guns”. An action scene inspired by the fifth video game where the characters are driving a Hummer while being chased by zombies is featured, but for the film the Hummer was changed to a Rolls Royce Phantom.

Returning from the previous film are: Milla Jovovich as Alice, Sienna Guillory (Jill Valentine) and Boris Kodjoe (Luther West).Shawn Roberts (Albert Wesker) makes a cameo appearance. Colin Salmon who played James “One” Shade and Michelle Rodriguez who played Rain Ocampo in the first film return. Oded Fehr who portrayed Carlos Olivera in the second and third film also returns. There will be two “versions” of Rain, One, and Carlos; one being portrayed as “evil” and one as “good”.

On August 10, 2012, a group of 27 people dressed as zombies “invaded” the Shibuya shoping district and handed out leaflets to promote the film. The group marched across the crossing in front of the Shibuya Station and the moved on to Shibuya’s underground shopping area “Shibuchika” and to the “Shibuya Cine Palace”.