Restless is a 2011 drama film directed by Gus Van Sant and written by Jason Lew. It stars Henry Hopper and Mia Wasikowska. Shot in Portland, Oregon and produced by Bryce Dallas Howard, Ron Howard and Brian Grazer for Sony Pictures Classics, Columbia Pictures and Imagine Entertainment, it will be released by Sony Pictures Classics on September 16, 2011.  It was screened in the Un Certain Regard section at the 2011 Cannes Film Festival on May 12. 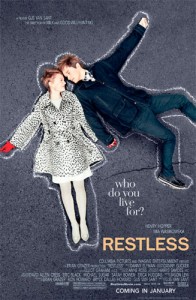 At the center of the Restless is Henry Hopper’s Enoch Brae. It is his struggle that defines the film and his arc that takes the audience to a place of hope

Annabel Cotton (MIA WASIKOWSKA) is a beautiful and charming terminal cancer patient with a deep felt love of life and the natural world. Enoch Brae (HENRY HOPPER) is a young man who has dropped out of the business of living, after an accident claimed the life of his parents. When these two outsiders chance to meet at a funeral, they find an unexpected common ground in their unique experiences of the world. For Enoch, it includes his best friend Hiroshi (RYŌ KASE) who happens to be the ghost of a Kamikaze fighter pilot.

For Annabel, it involves an admiration of Charles Darwin and an interest in how other creatures live. Upon learning of Annabel’s imminent early passing, Enoch offers to help her face her last days with an irreverent abandon, tempting fate, tradition and even death itself.

Young love has long been the stuff of great drama, from Shakespeare’s star-crossed Romeo and Juliet to the tear-jerking sentiment of Love Story. Now, from screenwriter Jason Lew and director Gus Van Sant comes a timeless and unique story that breathes new life into the old familiar tale. Restless tells the story of a young man hiding from his life, and the vibrant young woman who brings him out of his shell.

Echoing and evoking memorable film classics such as Hal Ashby’s Harold and Maude and recent indie hits such as Garden State, Restless aims for the head as well as the heart, offering rich characters and a deceptively simple story that will leave a lingering impression on film audiences.

The film was produced through Sony Pictures Classics, Columbia Pictures and Imagine Entertainment by daughter and father Bryce Dallas Howard and Ron Howard, as well as Brian Grazer. In August 2009, Gus Van Sant signed on to direct Restless. Based on a play by Jason Lew, the story centers on young love and mortality. In October 2009, Mia Wasikowska joined the project as the female lead. Wasikowska cut her hair for the film.  In November, Henry Hopper was cast as the male lead. Danny Elfman composed the score.

Principal photography began in Portland, Oregon on November 12, 2009 and concluded in December.Post-production was completed in July 2010.

A trailer was released in October 2010. Restless was initially scheduled for release on January 28, 2011, but Columbia announced that they had pulled it from that slot in hopes of opening it later in the year. Columbia consequently withdrew the film from the 2011 Sundance Film Festival lineup as well.

Restless will be released on September 16, 2011 by Sony Pictures Classics.  The film opened the Un Certain Regard section of the 2011 Cannes Film Festival on May 12.