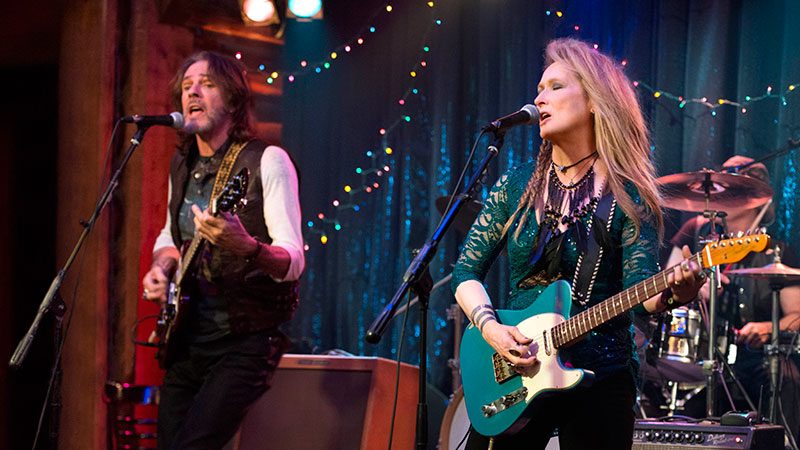 In an original film loaded with live musical performances, Meryl Streep stars as Ricki Rendazzo, a guitar heroine who made a world of mistakes as she followed her dreams of rock ‘n’ roll stardom. 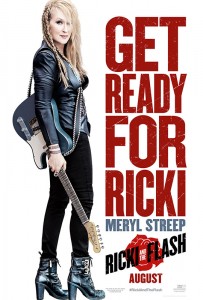 So, though Streep was the first, best, and only choice to play the role, she would have to learn to play guitar to bring Ricki to life.

“Everyone has part of their past they wish they could change,” says director Jonathan Demme, who takes the helm of the new film Ricki and the Flash. Ricki, brought to unforgettable life by Meryl Streep, is a guitar-shredding, hard-rocking mama, filled with regret for the mistakes of her past, who now has a chance to make things right.

Ricki Rendazzo was born in the mind of Diablo Cody, the Oscar® winning screenwriter of Juno and Young Adult and the television series “The United States of Tara.”

Cody says that the inspiration for such an original character actually came from real life and very close to home. “The character of Ricki was actually inspired by my mother-in-law, Terry, who is the lead singer in a Jersey Shore rock band called Silk and Steel,”

With Cody’s original screenplay in hand, producer Marc Platt was able to bring Streep into the role. ““I was over in London making Into the Woods with Meryl and I said to her one day, ‘I have something I think is really special and I’d like you to read it.’ I wasn’t really surprised when Meryl came back a few weeks later and said, ‘Remember that script you gave me? I loved it.’” Platt explains.

Playing this role offered Streep the chance to be paired in scenes with her actress daughter, Mamie Gummer. A mother-daughter story at its core, the real-life frisson that results gives the film added potency. Demme insisted that the two not talk outside of the scenes. Very close in real life, their estrangement on film is as palpable as their resemblance. True genetics adds a rare level of reality to the film.

Ricki and the Flash takes place in the San Fernando Valley section of Los Angeles and in Indiana. However, the film was largely shot in New York (with a few exteriors in L.A.). It fell to production designer Stuart Wurtzel to create locations that would serve both settings. While the band practiced in the former Rodeo, Wurtzel created The Salt Well on a soundstage, using the Rodeo as his inspiration.