In a dark thriller that reunites him with writer/director David Twohy, Vin Diesel reprises his role as the antihero Riddick, a dangerous escaped convict wanted by every bounty hunter in the known galaxy. Riddick is based on characters created by Jim & Ken Wheat. 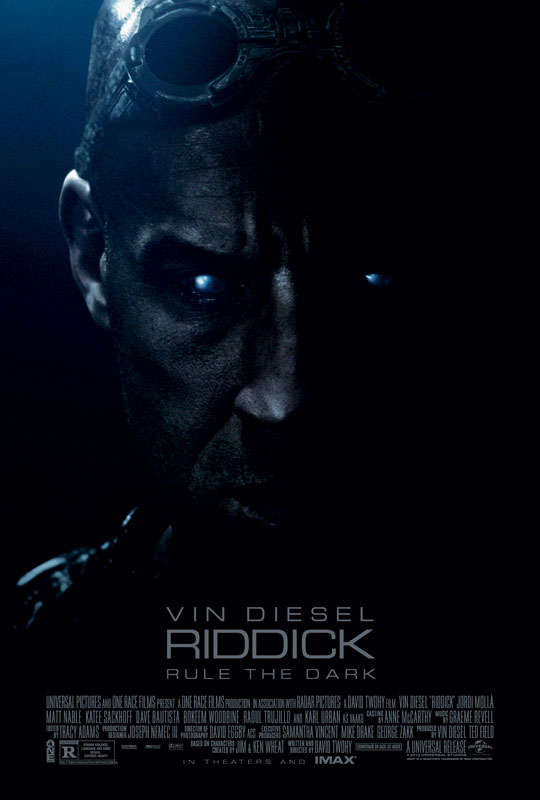 In the planet upon which our hero is stranded, there are two main creatures: the alien jackal and razor-tailed mud demons. Scenes involving the creatures were shot in part with live puppets and in part with visual effects.

With more than 45 million followers on Facebook, Vin Diesel was likewise questioned by those who wanted to discover additional creatures and meet new players of the universe that the fugitive inhabits. Shares Diesel: “People wrote, ‘When are we going to get more Riddick? You have to make this movie.’ It was comments like this that made us feel like we had to make it at all costs.” Fortunately, throughout the years, Twohy and Diesel had met regularly to ponder what should and could come next. It was during these marathon conversations that they expanded Riddick’s universe and the mythologies and characters that reside within.

Having full creative control of the property enabled the filmmakers to go not only against predictable choices, but also to take risks on undiscovered talent. Explains Diesel: “We were able to be more liberal in our casting to find the perfect actor for each role, which was not unlike Pitch Black. We were able to cast to the character, as opposed to the bankability of the name.”

What interested Jordi Mollà, one of Spain’s most recognizable actors, to become attached to the role of Santana—the volatile leader of the first ship of mercenaries to respond to Riddick’s beacon—was exploring the backstory that could explain Santana’s cruelty.

The casting of the role of Boss Johns, the leader of the second ship of mercs, was challenging because the character carried a secret: He was related to one of the characters whom Riddick bested in Pitch Black. Twohy discovered Matt Nable after watching an episode of an Australian television show. When casting the role of Diaz, a brutal mercenary who serves as Santana’s second-in-command, the filmmakers favored former WWE star Dave Bautista.

It was crucial to Diesel, Twohy and Field that Riddick evoke the terror of the first film and provide the visually stunning elements of the second. When it came time to scouting locations, Montreal proved to be the ideal city in which they could open up Riddick’s unexpected new journey.

To breathe life into the puppets, Twohy chose to work with one of Canada’s top-notch VFX shops. “Mokko Studio is this great house that was ready to step up and do a significant 3D character animation,” he says.