Carlos Saldanha returns to Brazil and reunites his beloved characters in RIO 2.  In the new film, it’s a jungle out there for Blu, Jewel and their three kids, after they’re hurtled from Rio to the wilds of the Amazon. As Blu tries to fit in, he goes beak-to-beak with the vengeful and villainous Nigel, and meets the most fearsome adversary of all…his father-in-law. 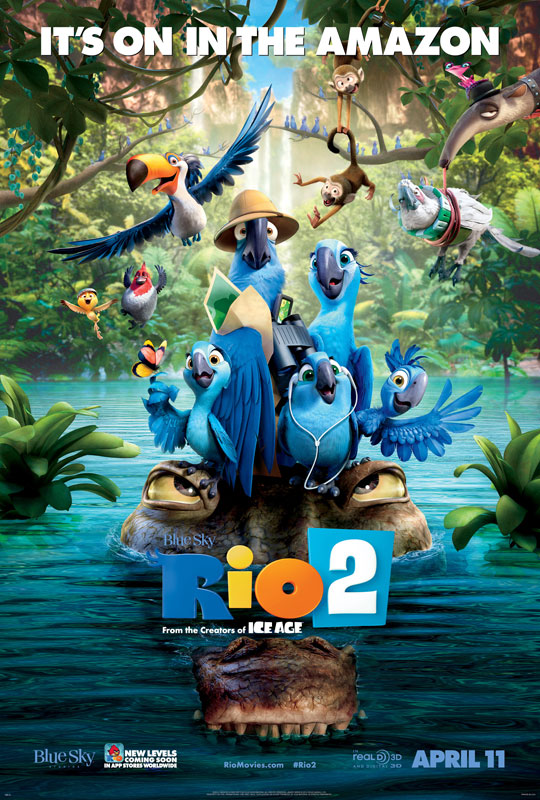 RIO 2 opens with a grand scene in which the birds we met in the first picture – and a flock of their friends – soar together in a rousing musical celebration, to the song “What is Love,” performed by Janelle Monáe

After Saldanha wrote the story, screenwriter Don Rhymer, who had worked on “Rio,” began fleshing out Saldanha’s ideas.  It was a fruitful collaboration, which sadly ended when Rhymer passed away in late 2012. “Don was our guy,” says Saldanha. “He embraced the vision of the first film and had really exciting ideas for RIO 2.  His death left a big gap for us”

Among “Rio’s” multitude of fans are two of its leading lights: Anne Hathaway and Jesse Eisenberg.  “The filmmakers and Carlos set a high bar with ‘Rio,’ but they’ve just blown the sky open with RIO 2!” exclaims the Oscar-winning actress.  Adds Eisenberg, “RIO 2 doesn’t feel like an extension of the first film; it’s something totally different.  And I love playing Blu because he’s such a funny and sweet guy.”

Leslie Mann returns to voice Linda. Natalie Morales portrays the newscaster who is the first to report that Linda and Tulio have made this profound scientific discovery.  Making her feature film debut, Morales says she was “really psyched about being turned into an animated character”. Jamie Foxx’s Nico is a little yellow ball of energy who lives for music.  Says the Oscar-winning actor: “When you hear the music, you know you’re in Brazil – or you know you want to be there.” Roberto owes his vocal prowess to the music icon who voices him: Bruno Mars. The filmmakers considered a long list of candidates for the role, but a Mars appearance on “Saturday Night Live” helped sealed the deal.

To bring the wonders of the Amazon to life, the filmmakers relied on Blue Sky Studios’ proprietary rendering software, CGI Studio™, which the research and development teams have continued to evolve for over a decade.