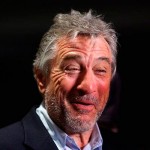 In 2003, it was announced that De Niro had been diagnosed with prostate cancer, although he went on to make a full recovery

Robert De Niro, Jr. (born August 17, 1943) is an American actor, director and producer. His first major film role was in 1973’s Bang the Drum Slowly.  Robert De Niro was born in New York City, the son of Virginia Admiral, and Robert De Niro, Sr., an abstract expressionist painter and sculptor. De Niro’s father was of Italian and Irish descent, and his mother was of English, German, French, and Dutch ancestry.

Nicknamed “Bobby Milk” for his pallor, the youthful De Niro hung out with a group of street kids in Little Italy, some of whom have remained lifelong friends of his. De Niro’s first film role in collaboration with Brian De Palma was in 1963 at the age of 20, when he appeared opposite his friend Jill Clayburgh in The Wedding Party; however, the film was not released until 1969. He then played in Roger Corman’s 1970 “Bloody Mama.” It starred Shelly Winters as Ma Barker. He gained popular attention with his role as a dying Major League Baseball player in Bang the Drum Slowly (1973).

De Niro and his first wife Diahnne Abbott have a son, Raphael, a former actor who works in New York real estate.De Niro also adopted Abbott’s daughter from a previous relationship. Robert De Niro has twin sons, Julian Henry and Aaron Kendrik, conceived by in vitro fertilization and delivered by a surrogate mother in 1995, from a long-term live-in relationship with former model Toukie Smith.

In 1997, Robert De Niro married his second wife, Grace Hightower, at their Marbletown home. Their son Elliot was born in 1998 and the couple split in 1999.The divorce was never finalized and in 2004 they renewed their vows. Hightower appeared in a 1994 episode of NYPD Blue and had her film debut in 2009’s Precious.

On February 4, 2008, Robert De Niro supported Obama at a rally at the Izod Center in New Jersey before Super Tuesday. Robert Denire was voted №2 greatest movie star of all time in a Channel 4 (UK) poll.

De Niro takes pride in the development of his production company, Tribeca Productions, the Tribeca Film Center, which he founded with Jane Rosenthal in 1988, and in the Tribeca Film Festival, which he founded with Rosenthal and Craig Hatkoff in 2001 as a response to the attacks on the World Trade Center. The festival was conceived to foster the economic and cultural revitalization of Lower Manhattan through an annual celebration of film, music, and culture; the festival’s mission is to promote New York City as a major filmmaking center and help filmmakers reach the broadest possible audiences.
Through Tribeca Productions, De Niro develops projects on which he serves in a combination of capacities, including producer, director and actor.