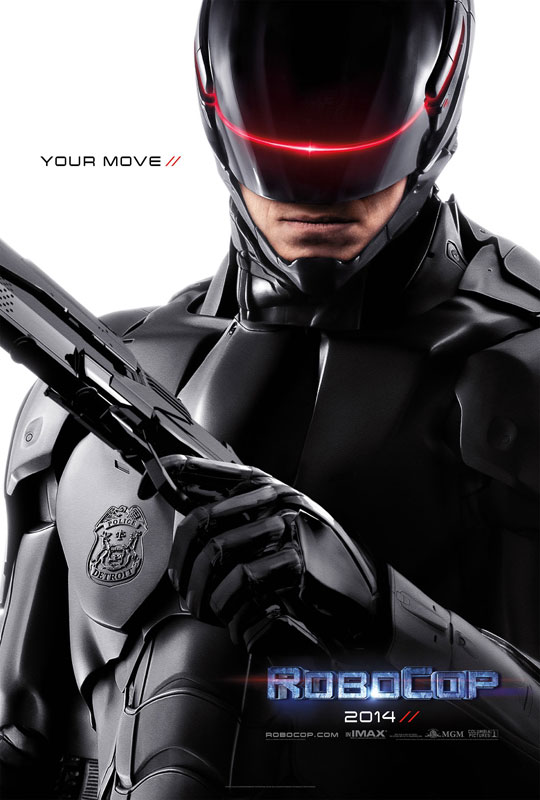 In RoboCop, the year is 2028 and OmniCorp – the world’s leader in robot technology – sees a golden opportunity to reap billions for their company. When Alex Murphy (Joel Kinnaman) – a loving husband, father and good cop doing his best to stem the tide of crime and corruption in Detroit – is critically injured, OmniCorp grabs their chance to build a part-man, part-robot police officer.

Director José Padilha says that his involvement with the film began by a fortunate twist of fate: “I had a meeting at MGM, and we were talking about movies I might want to make.  They had a poster of the original RoboCop, and I said, well, that’s the movie I want to make.  I think it’s a brilliant film, an iconic classic.  I gave them my take, and they said, ‘Let’s do it.’  It was a lucky coincidence – a studio that had the right material, a guy who is a fan, and a poster.”

Man and machine unite in RoboCop, a reimagining of the 1980s cult classic. Kinnaman says he was attracted to play the role of Alex Murphy after meeting with José Padilha.  “José described his vision – his philosophical and political ideas that could fit inside the concept of RoboCop,” says Kinnaman.

The producers of the film, Marc Abraham and Eric Newman, say that Padilha was the perfect choice to helm this new vision for RoboCop.  “The studio took a real chance,” says Abraham. “They went to a filmmaker who had made some brilliant documentaries as well as two films, Elite Squad and Elite Squad 2, that became extraordinarily successful, particularly in Brazil.”

Michael Keaton plays Raymond Sellars, the CEO of OmniCorp.  Padilha says that though Sellars is ostensibly the film’s villain, he wanted to portray a fully human character – one who is almost right.  In playing the role, Keaton went to the highest sources to get some background into the cutting edge of the technology. “I learned a lot, because I had to know a lot about Sellars’ world in order to be honest on screen,” says Keaton.

To achieve the futuristic look of RoboCop, the filmmakers turned to production designer Martin Whist. To build the physical RoboCop suits, Whist worked with the team at Legacy Effects, one of Hollywood’s go-to sources for making visions become a reality as the creators of the Iron Man suit and other effects work. In designing RoboCop’s suits, Whist says that the second suit – the black suit – got the bulk of the attention from the designers.  “The second suit was black, more visually sleek, designed, thought out, and a little more elegant and aggressive.”

Whist also designed the two robots in the film – the ED-209 and the EM-208.  “For the 209, we again made a nod to the original,” Whist explains. Whist took a decidedly different turn for RoboCop’s motorcycle.  Based on a Kawasaki 1000, the design team made major modifications.

For the film’s visual effects, the filmmakers turned to visual effects supervisor James E. Price, who says that the scope of work on RoboCop fell into three main categories: 1) the robots – chiefly the EM-208s, the ED-209s, and RoboCop himself; 2) futurization of the environment; and 3) graphics and displays, including RoboCop’s point of view.

For RoboCop himself, all of these aspects and more came into play.  “There were a whole spectrum of techniques we used to bring RoboCop to life,” Price continues.  “We started with a performer in a suit – either Joel or a stuntman.  In some cases, we replaced portions of the suit – we’d keep only Joel’s head and face and replace the rest of the body for a very complex move.  And if RoboCop had to complete an action that a human couldn’t perform – moving faster or jumping farther – we went to an all-digital version of RoboCop.  When we animated RoboCop in those situations, we based the animation on how Joel would move and then we added that extra power or maneuverability or flexibility that only a robot could do.”