Rockyis a 1976 sports drama film directed by John G. Avildsen, and written by and starring Sylvester Stallone. It tells the rags to riches American Dream story of Rocky Balboa, an uneducated but kind-hearted debt collector for a loan shark in the city of Philadelphia, Pennsylvania. 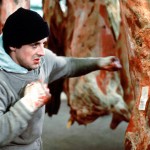 The famous scene of Rocky running up the steps of the Philadelphia Museum of Art has become a cultural icon. In 1982, a statue of Rocky, commissioned by Stallone for Rocky III, was placed at the top of the Rocky Steps. City Commerce Director Dick Doran claimed that Stallone and Rocky had done more for the city’s image than “anyone since Ben Franklin.”

Rocky starts out as a club fighter who gets a shot at the world heavyweight championship when the scheduled contender breaks his hand. The film also stars Talia Shire as Adrian, Burt Young as Adrian’s brother Paulie, Burgess Meredith as Rocky’s trainer Mickey Goldmill, and Carl Weathers as the champion, Apollo Creed.

The film, made on a budget of less than $1 million and shot in 28 days, was a sleeper hit; it made over $225 millionthe highest grossing film of 1976, and won three Oscars, including Best Picture. The film received many positive reviews and turned Stallone into a major star. It spawned five sequels: Rocky II, III, IV, V and Rocky Balboa.

Boxer Joe Frazier has a cameo appearance in the film. The character of Apollo Creed was influenced by outspoken boxer Muhammad Ali who fought Frazier three times. During the Academy Awards ceremony, Ali and Stallone staged a brief comic confrontation to show Ali was not offended by the film.

Due to the film’s low budget, members of Stallone’s family played minor roles. His father rings the bell to signal the start and end of a round, his brother Frank plays a street corner singer, and his first wife, Sasha, was the set photographer.

Other cameos include Los Angeles television sportscaster Stu Nahan playing himself, alongside radio and TV broadcaster Bill Baldwin and Lloyd Kaufman, founder of the independent film company Troma, appearing as a drunk. Longtime Detroit Channel 7 Action News anchor Diana Lewis has a small scene as a TV news reporter. Tony Burton appeared as Apollo Creed’s trainer, Tony “Duke” Evers, a role he would reprise in the entire Rocky series, though he is not given an official name until Rocky II.