Rosie Alice Huntington-Whiteley (born 18 April 1987) is a British model and actress, best known for modelling for Victoria’s Secret and for replacing Megan Fox as the lead female character in the film Transformers: Dark of the Moon, part of the Transformers franchise. 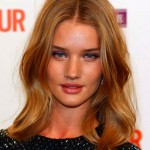 Since 2006, Huntington-Whiteley has modelled for American lingerie and beauty products brand Victoria’s Secret. She made her debut with the brand in the Victoria’s Secret 2006 Fashion Show, walking the Los Angeles runway.

She remained unknown in the fashion industry up until 2008 when she replaced Agyness Deyn for Burberry’s fall/winter collection. She got her first British Vogue cover, for the November 2008 issue, which saw her pictured alongside Eden Clark and Jourdan Dunn in a feature celebrating British models. Harper’s Bazaar‘s annual “Best Dressed List” placed her 6th on their list for the year 2008. The following year, she was featured as the face of Karen Millen’s spring/summer 2009 advertising campaign. Huntington-Whiteley received an Elle Style Award for 2009’s “Model of the Year”.She starred in a short film for Agent Provocateur playing a woman whose boyfriend forgets Valentine’s Day. For autumn/winter 2009, she modelled campaigns for Godiva and Miss Sixty. In late 2009, Huntington-Whiteley officially became a Victoria’s Secret Angel, modelling for the Victoria’s Secret Fashion Show in New York city.

In 2010, she was featured in the infamous Pirelli Calendar, photographed by Terry Richardson. Huntington-Whiteley hit the runway for designers Prada in Milan and Giles Deacon in Paris. For SS10 her advertising campaigns included: Monsoon, Thomas Wylde, Full Circle, and VS Online. She was featured on the cover of LOVE Magazine’s September issue, styled as a pinup girl. For fall/winter 2010, she modelled campaigns for Loewe, Thomas Wylde, and Leon Max. She also appeared in a new series of Burberry ads for the company’s beauty line. Fashion photographer Rankin devoted a book entirely to her titled, Ten Times Rosie. Rankin thinks Huntington-Whitely puts diversity back into fashion, “We’ve been looking at very, very skinny, almost masculine girls for a long time. [Rosie] really is the model of the moment. She’s the actress of the moment. She’s definitely going to become something much, much bigger.”

2011 Transformers: Dark of the Moon