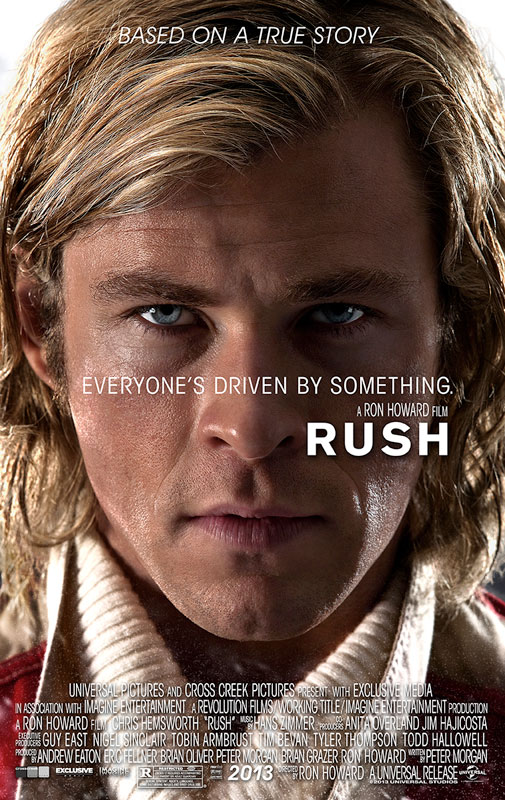 No man is an island, and each of the talented co-stars elevated the performances of the Rush troupe. To a person, the supporting cast was committed to not doing impressions, but capturing the essence of the characters they were honored to portray.

British screenwriter/playwright Peter Morgan believed that the Lauda-Hunt rivalry and their accompanying thrilling battles during the 1976 Formula 1 season was a story that transcended the sports pages.

Morgan has earned a reputation as a master of modern-history movie scripts. He captured the intrigue behind Uganda’s brutal dictator Idi Amin (The Last King of Scotland). “I grew up in England knowing all about James Hunt,” Morgan recalls, “but I never knew Niki’s side of the story.’” The screenwriter, who lives in Austria, approached Lauda with an idea to write a script that dramatized the tumultuous 1976 racing season. Lauda consented and provided Morgan with invaluable input during the draft stages.

Joining the production team on Rush was Howard’s longtime partner, Oscar®-winning producer Brian Grazer, who found himself as intrigued by Morgan’s script as he was by the writer’s last screenplay for Imagine. “Ron and I worked with Peter on Frost/Nixon,” Grazer relays, “and Peter has this ability to study somebody and at the same time get so microscopic that he can see the pores in their skin.”

Australian actor Chris Hemsworth has shot to stardom within the last few years. With the versatility he’s shown in movies Hemsworth was a natural for McLaren driver Hunt, whom Howard describes as “a rock star on wheels.”

Howard had not met the actor before casting the part. “Chris won the role with his fantastic audition,” he says. “I’d seen him in Thor and in Star Trek. I met him, I liked him, but I had no idea if he could be James Hunt.” Olivia Wilde, plays Suzy Miller Hunt, the famous model whom James marries, then neglects.

With the deft hand he brought to the ambitious Slumdog Millionaire, production designer Mark Digby knew he had an incredibly challenging shoot ahead of him with Rush. By integrating all racing and support vehicles into historically accurate environments, he had the Herculean challenge of reimagining racetracks from Europe to Japan.  “We had to create 12 to 15 different races each year from 1974 through 1976,” says Digby. “In addition to the racecars, there were lorries and caravans, ambulances and other support vehicles. There was the paddock area at each of the tracks where the mechanics work and bunting and signage to indicate we’re in a different country at a different Grand Prix…since we didn’t travel all around the world to do our filming.”

Adding to the authenticity was location filming at the British tracks Brands Hatch, Donington Park, Cadwell Park and Snetterton and at Germany’s notorious Nürburgring. Filming was also done at Blackbushe Airfield, a former drag racing venue in the U.K. The most emotional part of the production for the crew was filming at Nürburgring, the site of Lauda’s horrifying crash.