Salt is a 2010 American spy action thriller film directed by Phillip Noyce, written by Kurt Wimmer and Brian Helgeland, and starring Angelina Jolie, Liev Schreiber, Daniel Olbrychski, August Diehl and Chiwetel Ejiofor. Angelina Jolie plays Evelyn Salt, who is accused of being a KGB sleeper agent, and goes on the run to try to clear her name. While Tom Cruise was initially secured for the lead, the script was ultimately rewritten for Jolie. 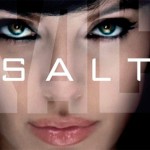 On a budget of $110 million Salt’s principal photography took place mostly on location in New York and Washington, D.C. from March to June 2009, while re-shoots were done in December 2009. Filming for a chase sequence took place in Albany on Water Street near the Interstate 787 ramp between April and May.

Filming took place on a location in Washington, D.C., New York City, and Albany, New York between March and June 2009. The film had a panel at the San Diego Comic-Con on July 22 and was released in North America on July 23, 2010 and August 18, 2010, in the United Kingdom.

In 2007, it was reported that Terry George and Peter Berg would direct, but both dropped out for undisclosed reasons. A year later it was confirmed that Phillip Noyce would direct. In 2007, Tom Cruise had been approached by Noyce to play Edwin A. Salt from the script written by Kurt Wimmer. Cruise was unable to commit to the script because of other commitments to projects and feared that the character was too close to his Mission Impossible character Ethan Hunt. The filmmakers tried to differentiate the character from Hunt, but eventually came to accept they were too similar and decided not to change the characteristics of Salt. Noyce said “But, you know, he had a valid point. It was kind of returning to an offshoot of a character that he’d already played. It’s like playing the brother, or the cousin, of somebody that you played in another movie”.

Columbia Pictures executive Amy Pascal suggested Angelina Jolie to Noyce, who had often spoken to Jolie in the past about a desire to create a female spy franchise. Angelina Jolie was sent the script in September of that year and liked it. Wimmer, Noyce, and producer Lorenzo di Bonaventura went to visit Angelina Jolie at her home in France to discuss a possible script and character change. Writer Brian Helgeland helped with the character development and dialogue of the script based on the notes that came out of those discussions with Jolie and to accompany the gender change, the title character’s name was changed to Evelyn Salt.

When asked if the script written for Cruise was the same for Angelina Jolie, he said “I think that it’s just been a continual process, obviously accelerating by changing the central character. But the ideas—the locomotive of ideas that drive the movie are the same. An undercover CIA operative is accused of being a Russian mole, and has to go on the run to defend themselves . That’s been the same since day one. The tone of the film has changed in this evolution. In the same way, I guess, as—you know—action thrillers have changed along the lines of the Bond films and the Bourne films”.

On February 19, 2009, it was reported that Liev Schreiber would play the role of Ted Winter, Evelyn Salt’s friend and colleague in the CIA. Three days later Variety reported that Chiwetel Ejiofor would play Peabody, who is in pursuit of Salt.