After the infamous San Andreas Fault gives, triggering a magnitude 9-plus earthquake in California, a search and rescue helicopter pilot (Dwayne Johnson[1]) and his estranged wife (Carla Gugino) make their way together from Los Angeles to San Francisco to save their only daughter. 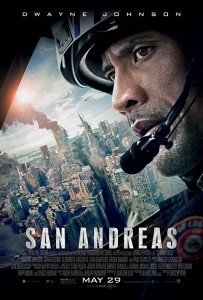 Director Brad Peyton likes to shoot on the Z-axis, which creates a sense of movement away from and towards the camera.

The idea for “San Andreas” originated with producer Beau Flynn, a longtime fan of classic disaster films, who was eager to update the genre with today’s 3D capabilities and cutting-edge technology to create photorealistic images.

Dwayne Johnson stars as the story’s pivotal character, Ray Gaines, an LAFD Search and Rescue helicopter pilot, who embarks on a deeply personal mission when the disaster strikes. “I was captivated by the script; I was moved. It grabbed me by the throat and didn’t let go,” he says. “A movie like this is about size and scope,” he continues.

It was this fusion of wide-scale calamity and intensely personal connections that drew not only Johnson but director Brad Peyton to the project while it was still in the latter stages of development with Flynn. The three had previously collaborated on the worldwide hit “Journey 2: The Mysterious Island[3],” Says Peyton, “This is different from anything I’ve done before. It was more demanding in its larger-than-life elements but also in striking that tonal honesty.”

A massive confluence of moving parts, “San Andreas” employed more than 1300 visual effects shots as roads buckle, bridges snap, fires erupt across multiple cityscapes and buildings fall, smashing into other buildings on their way down like goliath dominoes. Then, just when you think it’s time to catch your breath, a 15-story tsunami – a virtual wall of water – comes crashing into San Francisco. “Brad really takes pride in moving the needle,” Johnson attests.

Weaving together the various creative elements, from sets, locations and stunts to practical and digital effects, Peyton’s directive was always to make each piece of the mosaic as visually realistic as possible. Though “San Andreas” required a great deal of CGI, that meant accomplishing a significant amount of the action in-camera, certainly more than might be expected on a movie of such scale. Addressing the complexity of designing each image, he says, “Even if it’s a CG shot, like an over-the-shoulder of someone in a boat, I’d ask my editor to put in all the boat green-screen elements so when I lined it up I knew how fast it had to be going. You need those references.”

Flynn produced the first feature film ever shot in high-definition 3D, 2008’s “Journey to the Center of the Earth,” and used a 3D conversion for “San Andreas.” “I’m a massive believer in 3D technology,” he says.

The production captured a large portion of exteriors in Los Angeles and San Francisco, which were then combined with location shoots in and around Australia’s Gold Coast region in southeastern Queensland. Several major sets were built on Village Roadshow Studios’ soundstages, including in its nearly 13,000-square foot water tank – the largest purpose-built film water tank in Australia and one of the largest in the world, with a 1.5 million gallon capacity.

To create the music for “San Andreas,” Peyton again turned to Andrew Lockington, the composer on both “Journey to the Center of the Earth” and “Journey 2: The Mysterious Island.” Always open to unique influences, Lockington incorporated one that was especially appropriate: sounds derived from actual waveform data collected from the San Andreas Fault a year ago.