This action-packed thriller stars Nicolas Cage as Will Gerard, a happily married family man whose quiet life is turned upside-down when his wife, Laura (January Jones), is brutally attacked one night while leaving work. 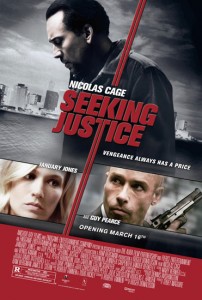 Nicolas Cage says he was attracted to Seeking Justice’s story because of its philosophical examination of human nature.

At the hospital, waiting for news about his wife’s condition, Will is approached by Simon, (Guy Pearce) who proposes an intriguing offer: Simon will arrange to have a complete stranger exact vengeance on Laura’s attacker, in exchange for a favor from Will in the near future. Distraught and grief-stricken, Will consents to the deal, unwittingly pulling himself into a dangerous underground vigilante operation. While continuing to protect his wife from the truth, he quickly discovers that his quest for justice could lead to frightening and deadly consequences.

In Seeking Justice, one fateful decision made in the throes of grief and anguish sets in motion a spiral of intrigue, manipulation, fear and paranoia. In choosing opportunistic vengeance over institutional justice, a devoted husband and teacher finds himself on the run from authorities and the self-righteous leader of a secretive vigilante group.

“This is a story about a distressed man who accepts an offer of retribution and soon realizes he’s made a pact with the devil,” says director Roger Donaldson, helmer of such acclaimed suspense thrillers as No Way Out and The Bank Job. “He stumbles into something much larger than what he thought he was getting into.”

Written by Robert Tannen and Yuri Zeltser, the story explores, at an accelerating pace, a complex psychological maze of victimization, retribution and justice. Tannen collaborated with the director in polishing the script in New Orleans in the weeks prior to principal photography, and says he was thrilled to have his story in the hands of Donaldson and Nicolas Cage, of whom he says he is a “huge fan.”