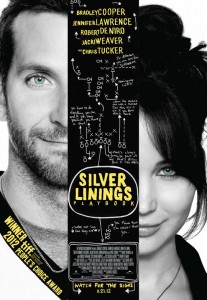 Pat Solatano (Bradley Cooper[1]) has lost everything — his house, his job, and his wife. He now finds himself living back with his mother (Jacki Weaver) and father (Robert De Niro) after spending 8 months in a state institution on a plea bargain. Pat is determined to rebuild his life, remain positive and reunite with his wife, despite the challenging circumstances of their separation.

I was shown the book by Sidney Pollack who had acquired it with Harvey Weinstein. This was before THE FIGHTER. Although SILVER LININGS was fiction, it was likewise filled with very intense authentic people in a very specific local world the author knew well: emotional homes, people under great pressure, surprising drama, and unintended comedy. I am very drawn to these worlds, I find them fascinating. A certain place, a certain time, certain foods, certain rituals, unlike anything else, yet all the emotions and yearnings for love and respect and livelihood are deeply universal.

I found that Bradley Cooper[1] had, as we spoke, so much of the perceptive directness, fierceness, and vulnerability the Pat Solatano character has; and he was very hungry to play an intense unexpected character for him, which is the best timing for a director. Jennifer Lawrence and I had not met, but she knocked me out on her Skyped audition, and Harvey’s “Oh my God” upon viewing expressed his complete agreement.

I love romance as much as I love authentic neighborhood worlds; the chemistry of Bradley and Jennifer was palpably combustible as the two very particular people, a gift. In another gift, I was fortunate to find Mr. De Niro with his own strong desire to be authentic in an emotional role of the kind we had discussed over the years that had personal ties for both of us as fathers.

The rest of the neighborhood family constellated around the remarkable Jacki Weaver, Chris Tucker, Anupam Kher, John Ortiz, Julia Stiles, Shea Whigham, Paulie Herman, and Dash Mihok. At the end of the day I love to peer into the lives of these people trying to overcome what they face, often themselves, in their own particular house on their own particular block, in ways that are heartbreaking and unbearable before somehow they pull through. For now.