Sitting on the Edge of Marlene is told through the eyes of clean living, sixteen year old Sammie. Sammie attends welfare-sponsored after-school Jesus Camp while her pill-popping, alcoholic mother Marlene goes on crime sprees. Mother and daughter share a romantic fascination with death as an ideal far and away better than the world they’re in currently. 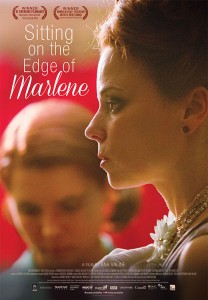 At the 2010 Women in Film Festival in Vancouver, Valine was announced as the recipient of the Women in the Director’s Chair Feature Film Award for the project. The Award provided up to $120,000 in in-kind support for the project.

Sitting on the Edge of Marlene began its life when writer / director Ana Valine graduated from the Canadian Film Centre’s Director’s Lab. She had completed the CFC Short Film How Eunice Got Her Baby, which had received accolades on the film festival circuit, and began searching for her first feature film project.

Valine recalls how she first met Billie Livingston, the author of the novella The Trouble With Marlene that provided the source material for the film. “I met Billie a long time ago in about ’98. I was TADing on a show where she was a stand-in and she brought me her novel one day, Going Down Swinging. It was her first full published novel, and I read it and I loved it.” Valine remembers further, “When I finished at the Film Centre I was looking for material to adapt and I was reading all these short stories and plays, and nothing was really sticking. And then, kind of in the middle of the night, this bubble of memory came up about the novel. I bought it again, and I read it. It was just too much to do as a first feature…it’s meaty and it’s complicated. So I found Billie and we met and went for martinis and she brought a stack of her short stories. I think The Trouble With Marlene was about the 3rd one I got into, and I was like, “this is it, this is the one” and so I called her and I said “this is the one I want”.”

Valine began work on the treatment for the feature film and also started the search for a producer to bring on to the film. She approached Foundation Features and connected with Amber Ripley, who agreed to come on as the Producer of the project. Ripley and Valine worked on the treatment from the novella stage to the first drafts of the script and were successful in raising development fund from Telefilm Canada, The Harold Greenberg Fund, CORUS Made With Pay and Creative BC.

Ripley and Valine worked to cast the film’s leads and also chose their Director of Photography, Steve Cosens, to helm the picture with Valine. As Ripley worked on securing the production financing, Valine went deep into prep for the film while in Montreal, where she was able to be close with her lead actress, Suzanne Clément, and her directing mentor, Denys Arcand. Valine returned to Vancouver for prep and production began on the film in March 2013. The film completed post-production in Vancouver in November 2013.

Sitting on the Edge of Marlene features Suzanne Clément in the role of “Marlene”, Paloma Kwiatkowski as “Sammie” and Callum Keith Rennie as “Fast Freddy”. “We started with the role of Marlene”, recalls Ripley. “We did some research and Ana brought up Suzanne Clément. We saw Laurence Anyways and after seeing that movie we both just knew we wanted her in the role, so we sent the script out to her”

While the role of Marlene was a relatively quick process, Valine and Ripley knew they would need to invest some time in the role of the 16 year old daughter and lead in the film, Sammie. “We always thought that the Sammie character would probably be an unknown because she’s so young,” comments Ripley. “We had a casting session in Vancouver and then went to Toronto and had casting sessions there as well. As soon as we saw Paloma Kwiatkowski, we just knew she was the character. Our first audition, actually, is when we found our Sammie.”

The filming style and aesthetic is beautiful, with classic fluid moves, like a tango. Explains the film’s Director of Photography, Steve Cosens. The film is timeless, or rather, there are elements of all time. None of these elements place the film in an absolute time period. It is today and last century. This was accomplished by not accentuating the new. “Ana really wanted a timeless feel in the film so we intentionally chose locations that were more generic,” reveals Cosens.

Cosens remarks, “The color palette that I’m playing with is made up of blues and pinks and ambers. Overall I would say that the palette is muted…there’s a lot of browns. I call the colors the colors of bruises.”