Skyfall is the twenty-third spy film in the James Bond series, produced by Eon Productions for MGM, Columbia Pictures and Sony Pictures Entertainment. It features Daniel Craig‘s third performance as James Bond and Javier Bardem as Raoul Silva, the film’s villain. The film was directed by Sam Mendes and written by John Logan, Neal Purvis and Robert Wade. 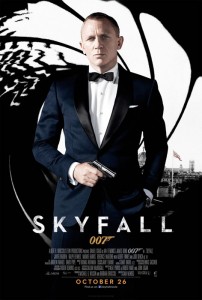 Shooting was planned to take place at Duntrune Castle in Argyll, Scotland for Skyfall’s finale, but was cancelled shortly after filming began. Glencoe was instead chosen for filming of these scenes.

Mendes was approached after the release of Quantum of Solace. During development of the film, production was suspended and original screenwriter Peter Morgan left the project due to MGM’s financial troubles. Pre-production resumed in December 2010. Logan, Purvis and Wade wrote the final version of the script, incorporating Morgan’s ideas in it. Filming began in November 2011, and primarily took place in England, China, Scotland and Turkey.

Skyfall will be the first James Bond film to be released in IMAX venues. The film’s release will coincide with the franchise’s 50th anniversary, which began with Dr. No in 1962.

Principal photography was scheduled to take up 133 days. Filming began on 7 November 2011in and around London,with scenes shot in Southwark and Whitehall, the National Gallery,Smithfield meat markets and St Bartholomew’s Hospital, Canary Wharf, the Department of Energy and Climate Change, Charing Cross station and the Old Royal Naval College in Greenwich, with residents reporting further filming as taking place in Cadogan Square, Tower Hill,and Parliament Square. The Vauxhall Bridge was closed to traffic for filming the aftermath of an explosion at the MI6 headquarters at Vauxhall Cross. Unlike The World Is Not Enough, which also featured an explosion at the building—which was filmed at a large-scale replica—the explosion in Skyfall will be added digitally in post-production.

Production moved to Turkey in March 2012, with filming reported to be continuing until 6 May. A group of Turkish teenagers infiltrated a closed set in a railyard in Adana to film rehearsals of a fight scene on top of a train before being caught by security. Parts of Istanbul — including the Spice Bazaar, Yeni Camii, the Imperial Post Office, Sultanahmet Square and the Grand Bazaar — were closed for filming in April. Store owners in the affected areas were reportedly allowed to open their shops, but were not allowed to conduct business, instead being paid TRY

Production faced criticism for allegedly damaging buildings while filming a motorcycle chase across rooftops in the city. Michael G. Wilson denied these claims, pointing out that the film crew had removed sections of rooftops before filming began and replaced them with replicas for the duration of the shoot; when filming finished, the original rooftops would be restored.