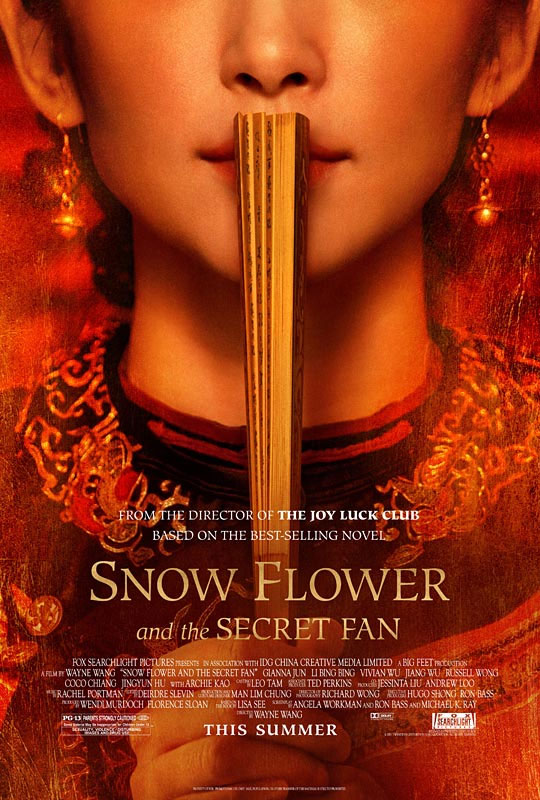 Snow Flower and the Secret Fan novel received an honorable mention from the Asian/Pacific American Awards for Literature.

Zhang Ziyi dropped out of the film, which now stars Li Bingbing, Jun Ji-hyun and Hugh Jackman. Filming in China began in February 2010. Fox Searchlight has acquired North American rights to the film.

Inspired by the bestselling novel Snow Flower and the Secret Fan by Lisa See, the film is a timeless portrait of female friendship. In 19th-century China, seven year old girls Snow Flower and Lily are matched as laotong – or “old sames” – bound together for eternity. Isolated by their families, they furtively communicate by taking turns writing in a secret language, nu shu, between the folds of a white silk fan.

In a parallel story in present day Shanghai, the laotong’s descendants, Nina and Sophia, struggle to maintain the intimacy of their own childhood friendship in the face of demanding careers, complicated love lives, and a relentlessly evolving Shanghai. Drawing on the lessons of the past, the two modern women must understand the story of their ancestral connection, hidden from them in the folds of the antique white silk fan, or risk losing one another forever. What unfolds are two stories, generations apart, but everlasting in their universal notion of love, hope and friendship.

The novel depicts human suffering in many ways: the physical and psychological pain of foot binding; the suffering of women of the time, who were treated as property; the terrible trek up the mountains to escape from the horrors of the Taiping Revolution; the painful return back down the mountain trail with dead bodies everywhere. Some estimate that the number of people killed during the Revolution was approximately 20 million.

The detailed treatment of the suffering which Lily and Snow Flower experience in their laotong relationship is a major aspect of the book. Lily’s need for love and her inability to forgive what she considers to be acts of betrayal cause her to inflict harm on many people, Snow Flower most of all. Believing that Snow Flower has not been true to her, Lily betrays her by sharing all her private secrets to a group of women, virtually destroying Snow Flower’s reputation. When Snow Flower is dying, Lily is called to her bedside and tends to her until the end.